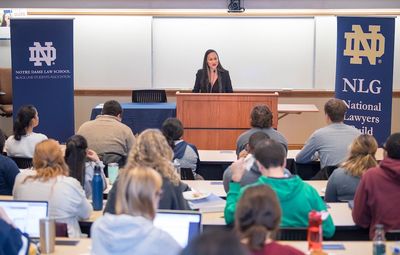 Carmen Perez’s activist roots were planted as a child growing up in Oxnard, Calif. Her older brother went to prison, and has been in and out of the criminal justice system for 30 years. She witnessed racial profiling of another brother by the police. Her Latino neighborhood in the coastal farming community west of Los Angeles was often plagued with violence and anger.

But it was the death of her 19-year-old sister in a car accident that led Perez to dedicate her life to initiatives that would transform young people, and to her calling for being a champion for justice.

On November 28, Perez delivered the Dean’s Lecture on Race, Law, and Society at Notre Dame Law School. “You are all going to be the architects, the shepherds, the champions that reimagine and redefine what justice really means in this country,” she told law students.

Since 2010, she has served as executive director of The Gathering for Justice, a nonprofit founded by legendary artist and activist Harry Belafonte. In that role, she promotes peace through civil and human rights, builds alternatives to mass incarceration and violence, and provides commentary and guidance for state and federal policy. 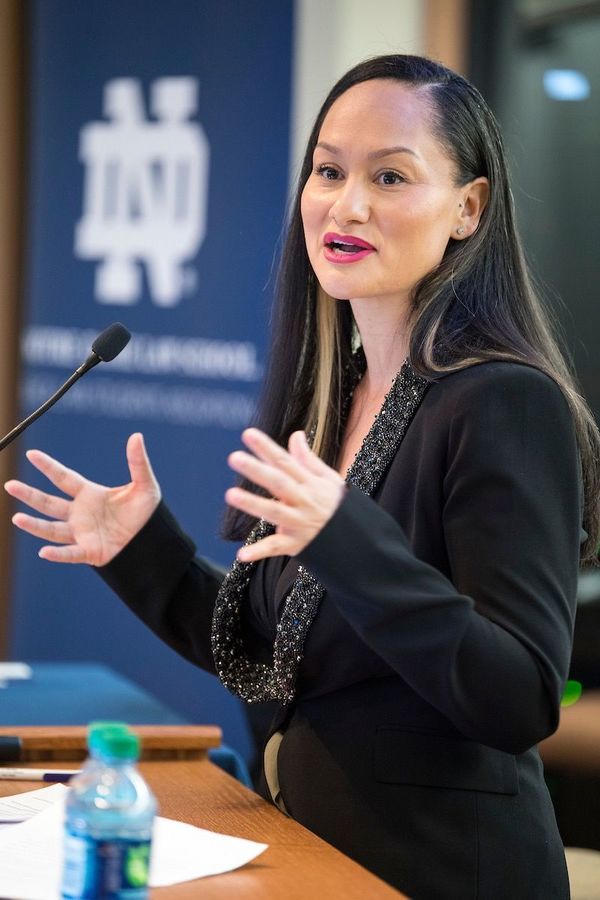 With a positive mind and a focus on solutions, Perez has a deep affinity for people.

“We are fighting injustice, not people,” she said.

She witnessed that lesson firsthand when her father declined to press charges against the driver who killed her sister, explaining that “he could not take another mother’s child away.”

“I learned about restorative justice through the actions of my parents,” said Perez.

Her work has taken her across the county and around the world, from park benches in New York City and floors in Little Rock, Ark., to juvenile detention facilities in California and New York, and prisons in El Salvador and Venezuela.

After graduating from the University of California, Santa Cruz, she started working with the Santa Cruz Youth Community Restoration Program, establishing alternatives to incarceration for juvenile offenders. She also co-founded the Girls Taskforce, providing programming to girls on probation.

She became a Santa Cruz County probation officer and used her life experiences to bring a different perspective to her cases.

“I tried to see the whole picture, to humanize the individual, to understand what happens to that one person ultimately affects the whole family. I saw potential in these kids that my high school basketball coach saw in me. I had a positive outlet, and many of these young people didn’t,” she said.

She said that when we focus only on systems, symptoms, and behavior, we don’t address and fix the underlying issues that lead young people into the prison system in the first place.

“Justice reform has many pillars that need to be dissected,” Perez said. “We won’t achieve stopping mass incarnation if we don’t see the full picture of liberation.”

Perez urged students to join her in building the community of which Dr. Martin Luther King Jr. dreamed, a community based on the concept of the traditional Zulu greeting sawubona — I see you.

“It is in the people where we find our shared values, not our politics or political party. Not through our laws. It is in each other that we find our hope, not in our government,” said Perez.

Perez has built diverse coalitions. She believes it is important to build community with people who are not the same as you. When others show up, she said, you can leverage their resources, and you gain access to a community of people that you may otherwise not have been able to access.

“I love this country. I love what it stands for. But, most of all, I love the people. The people are the fabric that make up this great tapestry that is America,” said Perez. “It is the 280 million stories — the indubious chief who stays true to his customs and has ceremony and sweat for people to heal, the first generation of El Salvadorians who want to get into medical school, the young man who got out of jail and earned a second chance, the coach everyone loves and knew, and the teacher who goes above and beyond — that paint this once-blank canvas and the tens of millions of stories that come before.”

She told the students to remember that the person who doesn’t look like you or vote like you is still part of arguably the greatest experiment in history, and the only way to leave this place better for our children is to work together.