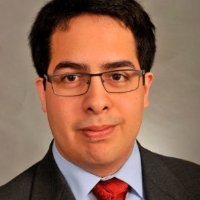 “This year’s award reflects that Carlos has earned his classmates’ and teachers’ highest respect and admiration,” Newton said. “Our Lardy Fellows represent the very best of NDLS, and I join all of his colleagues in thanking Carlos for the great example he has set for us.”

Dedicated by the Class of 1975 to the memory of their classmate Peter A.R. Lardy and “those who exemplify his courage, love, and understanding toward his fellow man,” the fellowship includes a substantial tuition remission for the recipient’s third year of law school.

“I am very grateful that the Law School community has selected me to receive this award,” Cisneros Vilchis said. “It is a great honor to be chosen for this award because of what it stands for: professional qualities, generosity, deep faith, and quiet cheerfulness and good humor in the face of adversity. I will strive to live up to the expectations of my classmates and professors that nominated me.”

Peter A.R. Lardy of the Class of 1975 died in his third year of law school. He was 28 years old, and had had cancer for 18 months. Those who knew him said he was loved by his classmates and the entire law school community. His classmates established a scholarship fund in his memory and asked the Law School to administer it. The Law School community provides information about the nominated second-year students including letters of recommendation or supporting statements, from which it selects a student to hold the fellowship during his or her third year of law school.

Both faculty and students praised Cisneros Vilchis for his leadership qualities, his warm personality, his ability to excel in his academics, and his exceptional gift for empowering diverse populations of students.

Cisneros Vilchis is a native of Monterrey, Mexico. He received his bachelor of science degree in business administration from The State University of New York College at Buffalo, where he was a member of the International Student Organization and New York Public Interest Research Group. At the University of Notre Dame Law School, he’s the treasurer of the Hispanic Law Student Association and member of the Business Law Forum, Health Law Society and Intellectual Property Law Society.

Cisneros Vilchis would like to work in Chicago for a nonprofit legal-service firm that focuses on providing affordable legal services to low- and moderate-income people after earning his J.D.

Cisneros Vilchis’ name will be added to the Lardy Fellowship plaque’s list of recipients, which includes Laura Wolk (2015-2016 ) and extends back to the first recipient, John F. Ready, in 1976.