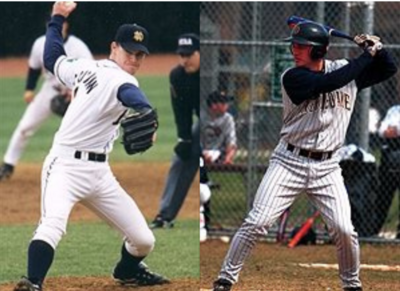 At the end of the 2000 baseball season, Matt Nussbaum’s joy over Notre Dame sneaking into the NCAA tournament was tempered only by the shoulder injury sidelining his friend and co-captain, Jeff Perconte.

After the selection show, Coach Paul Mainieri asked Nussbaum, a former walk-on who clawed his way to starting catcher and left fielder, to fill in for Perconte at second base. Nussbaum hadn’t played the position since high school and would be replacing a four-year starter.

So Perconte immediately took Nussbaum to the team’s field, gave him his second-baseman glove, and worked with him on the footwork needed for double plays and throwing pivots.

“I’ll never forget something like that,” said Nussbaum. “I think it’s emblematic not just of the person that Jeff is, but of the relationships that you build in a place like Notre Dame in a program like the one Paul Mainieri ran.”

Earlier in July, Nussbaum and Perconte – Notre Dame Law School graduates and still teammates – were promoted to two of the top positions in the legal department of the Major League Baseball Players Association, the union that negotiates the collective bargaining agreement with the league and team owners.

Nussbaum ’00, ’04 J.D. was made general counsel after playing an integral part in three bargaining agreements since 2011, and Perconte ’00, ’03 J.D. replaced him as deputy general counsel in the office he joined in 2017.

“I would be lying if I said that Jeff and I hatched this great plan to meet up and work together in baseball at a place like the MLBPA, that it was hatched over beers back in 1999,” Nussbaum said. “We didn’t have a grand strategy, but we wound up where we are, and I think we both consider ourselves very lucky.”

Being former players helps these attorneys better understand the players’ lingo, concerns and priorities, Nussbaum said. But their paths to the ballpark started on different trajectories.

While Perconte was highly recruited out of Illinois, Nussbaum walked on to the team in the footsteps of his father, Dick Nussbaum, who played for the Irish in the 1970s and went on to become a lawyer and president of the Midwest League in minor league baseball.

“In order to conduct fall practices, you need to have warm bodies to play and fill positions and catch bullpens,” said the younger Nussbaum. “And I started off as one of those warm bodies and so I had no idea whether I would progress to something more than that. I could have been cut from that team a dozen different times, and justifiably so. But Coach Mainieri stuck with me, and it’s one of the greatest gifts I’ve ever had.”

He went hitless in his 16 spot-duty bats in his first two years before becoming a regular player as a junior and captain as a senior. Nussbaum said that experience of setting goals, working hard and being patient has served him well as a lawyer.

Mainieri, who went on to win a national championship at LSU after 12 seasons with the Irish, teased that Nussbaum and Perconte may not have been the most gifted natural athletes, but they still found a way to lead the team to big victories.

“I’ve always been terribly proud of both of them,” Mainieri said. “As student-athletes at Notre Dame, they epitomized what the term was supposed to represent. They worked so hard, were so dedicated to the team, and performed their best in the most pressure situations. As students, they showed the same determination to excel. There was never an ounce of doubt in my mind that they would both succeed at an extremely high level in the field of law.”

After graduation, Nussbaum worked on a campaign for Joe Kernan, another former Irish baseball player who later became governor of Indiana. Nussbaum chose Notre Dame Law School because it would open doors to working anywhere in the country. “The reach of the Law School is so broad and so deep – that really was the main draw for me,” he said.

He planned to become a prosecutor but got a job offer from the National Hockey League Players Association. Three years later, he said two other former Irish baseball players, Major Leaguers Aaron Heilman (the third captain in 2000) and Craig Counsell, helped him move over to the baseball union.

Perconte joined the MLBPA after several years as a federal prosecutor in the U.S. Attorney’s Office in Chicago along with stints at two major law firms. Nussbaum said he kept an eye out for an opportunity to pull in his teammate because he trusted Perconte implicitly and admired his work ethic. Their most important task is to negotiate a collective bargaining agreement every five years.

“It takes a lot of preparation work and research and speaking with players, getting their feedback, figuring out what our priorities need to be, so that we’re prepared by the time we sit down at the bargaining table,” Nussbaum said. “The goal is to negotiate a fair agreement for the players without the need for work stoppage.”

The flip side is that the legal team must enforce the agreement, especially when a player faces disciplinary action. Other duties range from health and pension benefits for players and their families to on-field rule changes and workplace safety issues such as COVID-19 protocols.

“The great thing about it is there’s really never a dull day, and the vast majority of days of going to work doesn’t really feel like work,” Nussbaum said. “If you can find that as an attorney, I think you’ve really struck gold.”