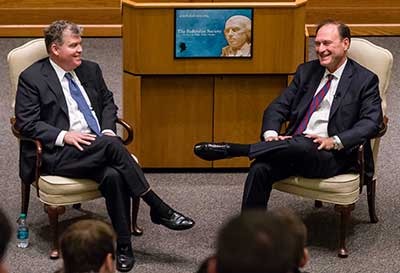 In the afternoon the Justice participated in a fireside chat with NDLS Professor William Kelley, an event that was sponsored by the NDLS Program on Constitutional Structure, the Federalist Society, and the Department of Political Science’s Potenziani Program in Constitutional Studies.

Alito joined the Supreme Court in 2006 after being nominated by President George W. Bush. He is the second Supreme Court justice to visit NDLS this year. Associate Justice Clarence Thomas, another Clynes Chair, visited the Law School in February to teach a seminar on Religious Freedom and the Establishment Clause.

The Judge James J. Clynes Jr. Visiting Chair in the Ethics of Litigation within the Judicial Process is named after Notre Dame alumnus Judge James J. Clynes Jr. (1945). The visiting chair may be held by members of the judiciary at the trial and appellate levels, distinguished law professors, and prominent members of the bar to teach or conduct public lectures relative to the ethics of litigation or judicial decision-making.