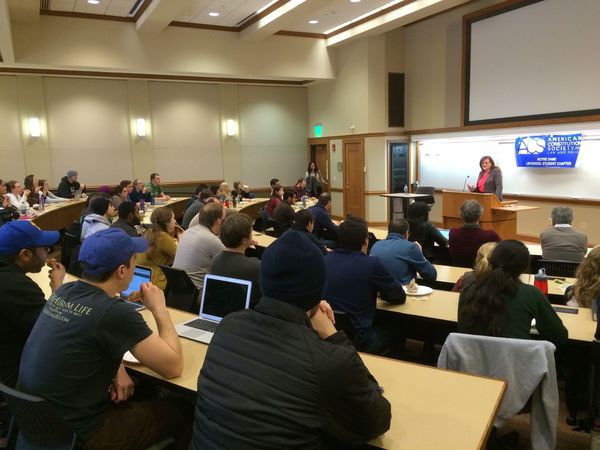 Andrea D. Lyon, dean and professor of law at Valparaiso University Law School, recently led a discussion at Notre Dame Law School that focused on the issues of mass incarceration and racial disparities within the criminal justice system.

“It’s important to talk about the apartheid that is our criminal justice system,” Lyon said. “I know that’s a strong word, but that’s just the truth.”

Lyon, who began her career working for the Cook County Public Defender’s Office, noted that African Americans in Cook County are eight times more likely to face jail time for petty drug crimes than whites convicted of the same offense.

“There are a lot of white people in Cook County, and they get high,” she said. “They sell drugs, they use drugs. Well over half of the people that use and sell drugs in the United States are white, but they don’t get arrested. There are a lot of reasons for that and one of those reasons is race.”

Lyon shared that the country won’t be able to solve the issue of mass incarceration, which costs the United States over $80 billion per year, unless it is willing to confront the issue of race.

“Race makes people very uncomfortable because there is no politically correct way to talk about it,” she said.

She also said that she believes race has played a factor in many of the recent police brutality cases that have received national attention, like the arrest of Sandra Bland and death of Laquan McDonald.

“We are in a position in this country right now where we are trying to figure out how we can afford what we’re doing and what to do with the public health issue called drugs,” she said. “Prohibition didn’t work and the interdiction of drugs is never going to work either.”

While Lyon said that it would be difficult for lawyers to act as advocates and successfully solve issues of racial disparities through litigation, she did encourage students to see the bigger picture and focus on long-term solutions to help disenfranchised communities.

To tackle the issue of mass incarceration, Lyon suggested looking for long-term solutions to tackle systemic problems: decriminalizing drugs, providing inmates in prison – who will eventually be released – with education programs and job training, and placing chronic drug abusers in treatment facilities.

Lyon was invited to speak by the NDLS American Constitutional Society.