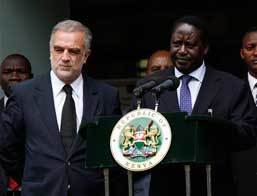 Following political disagreements over the results of the presidential election in Kenya in December 2007, violence broke out across the country initially as a protest against the announcement of incumbent President Mwai Kibaki as the winner but subsequently taking an ethnic, organized and systematic turn. The violent crises left over 1,200 people dead and about 350,000 displaced in less than two months. It was brought to an end through international mediation led by former UN Secretary-General Koffi Annan under the auspices of the African Union’s (AU) Panel of Eminent Personalities. The successful mediation resulted in a power-sharing deal among the two major protagonists in the crises – incumbent President Mwai Kibaki and opposition party leader Raila Odinga. The power-sharing agreement entered into by the two sides also included wide-ranging political, legal and constitutional reforms aimed at entrenching the rule of law and protection of human rights in Kenya to avoid a recurrence of such violence such as an undertaking to investigate the causes of the violence and to hold accountable the perpetrators through an independent commission of inquiry.

The Commission of Inquiry into Post-Election Violence (CIPEV) comprising of a Kenyan and two international commissioners was accordingly constituted in May 2008 and completed work in September 2008. The commission found that the violence was a mix of spontaneous political protest and well planned, organized and systematic attacks in an environment of impunity and incompetence by law enforcement agencies. The CIPEV recommended the creation of a special tribunal (with Kenyan and international judges) to prosecute the crimes committed during the violence and in the event of failure by the Kenyan government to set up the tribunal, the International Criminal Court (ICC) to step in. The Commission’s report did not name names but rather compiled a list of suspects in a sealed envelope to be submitted to the Special Tribunal/ICC.

Following the CIPEV Report, the coalition government’s attempts to pass legislation for the establishment of such tribunal have failed to pass in Parliament. The first bill was defeated in Parliament early this year and in July 2009, the Kenyan government decided in a cabinet meeting that there would be no Special Tribunal, the suspects of the post-election violence would be dealt with through the truth and reconciliation commission. A bill for the establishment of a Special tribunal that has been privately brought by a member of parliament (MP) does not seem to have sufficient political support to pass into legislation. The failure for political consensus on the establishment of a tribunal can be attributed to many reasons including lack of confidence by many Kenyans in Kenya’s justice system to deliver justice for political leaders and attempts by politicians to shield the suspects from justice.

This has left the ICC as the only alternative with some hope of ensuring justice for the violence. The ICC expressed interest in the Kenyan situation very early during the violent crises. As the violence was ongoing, the different sides to the violence (the government and opposition party) accused each other of committing international crimes and each claimed to have notified the ICC of violations by the other side. The Office of the Prosecutor (OTP) of the ICC in response to the allegations stated in February 2008 that since Kenya was a state party to the ICC statute, the OTP was carefully considering all information relating to crimes committed that would fall within the court’s jurisdiction. The Court has since then continued to monitor the situation in Kenya and enjoys wide support among Kenyans as a viable mechanism for accountability.

In a survey conducted by the Kenya National Dialogue and Reconciliation Monitoring Project in October 2009, 58 per cent of respondents favored the ICC as the appropriate mechanism to achieve accountability in Kenya largely due to concerns that any trials by a special tribunal would not be independent and fair. In a July 2009 agreement entered into between Kenyan government officials and ICC Prosecutor at the Hague, the Kenyan government undertook to pursue accountability for perpetrators of the violence and to refer the situation to the ICC if a satisfactory domestic accountability mechanism was not established within an agreed time-frame. But in a surprise turn of events, Koffi Annan on July 16 2009 handed over to the ICC Prosecutor the materials he had received from the Waki Commission including the sealed envelope containing the names of politicians and businessmen suspected to have been behind the violence. On 18th September 2009, the ICC Prosecutor claimed that Kenya would be an example to the world on how the ICC can work together with the country and the international community to end impunity and prevent future crimes after a meeting with Kenyan civil society organizations representatives.

Despite the failure by the Kenyan government to set up the Special Tribunal within the agreed timelines and repeated promises of co-operation made by the political leaders in Kenya to the ICC Prosecutor, the Kenyan leaders refused to make the anticipated self-referral of the situation to the ICC under Art. 14 of the Rome Statute. The OTP has thus resorted to Art. 15 of the Statute to open an investigation proprio motu. During his visit to Kenya on November 5th – 7th 2009, the Prosecutor announced that a 3 judge bench of the ICC’s Pre-Trial Chamber (PTC) had been constituted and that he would be applying to the chamber for authorization to open an investigation in Kenya under Art. 15 (3) of the Statute, making Kenya the first case to come before the ICC under Art. 15 powers of the OTP. The Prosecutor further announced that he believed he had a very strong case against Kenya and that he would proceed expeditiously on the Kenyan case. True to the promise, the OTP applied on November 26th 2009 to the PTC for authorization to open an investigation in Kenya. The OTP has expressed confidence that a decision from the PTC would be forthcoming by year’s end, investigations will promptly commence in early 2010 and trials could be conducted on Kenya in the course of 2010. The OTP has further issued a notification to witnesses and victims to forward evidence to the OTP within a month.

The ICC enjoys wide international support in Kenya. The US Special Envoy on War Crimes, Stephen Rapp, has stated that the US will cooperate closely and offer direct assistance to the ICC for its investigations in Kenya. The European Union and other major western aid donors have similarly expressed support for reforms and accountability. Meanwhile, political divisions within the coalition government between those who support and those who oppose the ICC investigations have widened and it will be necessary for international pressure to be sustained on the government if any reforms, including ICC trials, a