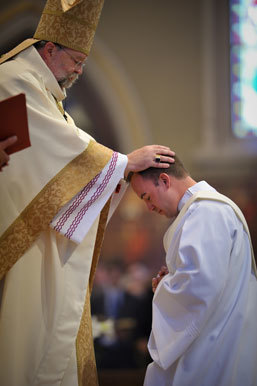 As a boy growing up on the outskirts of Philadelphia, Rev. Gerard “Gerry” Olinger, C.S.C. never told anyone that he might want to become a priest someday, despite sensing the possibility when he was in middle school. “I was an altar server, and one day after Mass I was sitting in front of a statue of Mary waiting for my mom to pick me up. I was thinking about religious life when, out of nowhere, a woman walked up to me and told me I’d make a great priest,” marvels Olinger.

While Olinger’s faith was always strong, it wasn’t until his time at Notre Dame Law School that he became increasingly certain about his desire to become a priest. “I felt comfortable talking about it with my friends and with professors. Conversations about religion were never taboo in the classroom. In fact, religion and faith were woven seamlessly into many of my classes. It was a really positive and transformative experience for me,” says Olinger.

Six years after graduating from NDLS, the Indiana Province of the Congregation of Holy Cross ordained Gerry Olinger at Notre Dame’s Basilica of the Sacred Heart on April 10, 2010. Father Gerry is now a residence hall director at the University of Portland in Oregon, where he ministers to students living there. He is also involved with the Campus Ministry office, and recently developed the God Centered Community Program at the school, which offers faith-building social activities for University of Portland students. 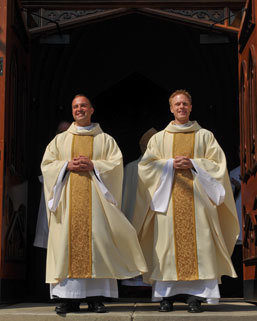 Next year, Olinger will serve as executive assistant to the president, Rev. E. William Beauchamp, C.S.C., previously an award-winning professor of business and law and executive vice president at the University of Notre Dame. “I’m really looking forward to that challenge,” says Olinger. “It’s a tremendous opportunity to have so early in my life in Holy Cross.” He hopes to eventually teach at the University as well.

While Olinger is sure of his decision to enter religious life, he knows the journey to reach that decision was not easy. To others in the process of discerning a vocation, whether it is a commitment to the priesthood, to marriage, or to a new career, Olinger has some advice. “There can be a tendency to want to know with certainty the direction you should take in life, but sometimes there’s no clear-cut answer. I like the passage from I Kings 19:11-12 in the Old Testament. There, Elijah was seeking the Lord in an earthquake, great wind, and a fire but finally heard Him in a ‘gentle whisper.’ What I realized is that sometimes God speaks to us in more subtle ways—in that still, small voice in our own life."