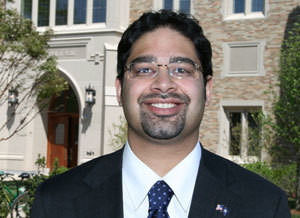 When Prime Minister Manmohan Singh of India made an official state visit to the White House in November 2009, Notre Dame Law School alumnus Manish Antani was there. He is a member of the executive committee of the U.S.-India Political Action Committee and a senior advisor to Imagindia, an international think tank in New Delhi, and holds a deep commitment to helping improve business and political relations between the United States and India.

Russia Today—one of Russia’s preeminent news stations, broadcasting to more than 100 countries on five continents—spoke to Antani about Singh’s U.S. visit, and the increasing role India is poised to play on the international stage, from its growing economic impact to its efforts to combat terrorism.

Prior to attending Notre Dame Law School, Antani served as the legislative director of the U.S.-India Political Action Committee—one of the leading ethnic lobbying groups in the United States, based in Washington, D.C. In that role, he regularly advised members of Congress and dignitaries from India on the intricacies of US-India relations. “During that time, I had the pleasure of leading delegations of American business and political leaders to India to meet with senior Indian business and political leaders.”

While at Notre Dame Law School, Antani participated in the Concannon Program of International Law in London—Notre Dame’s unique second-year study abroad program—and took coursework in all of the emerging disciplines of international law including international business, international trade, and international arbitration. “This law school allowed me to continue my focus on international affairs better than any other law school in the country could.”

Antani is an associate with Barnes & Thornburg LLP, one of the 100 largest law firms in the country with offices in Atlanta, Chicago, Delaware, Indiana, Michigan, Minneapolis, Ohio, and Washington DC.