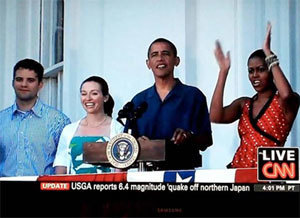 NDLS alumna Wendy Kosek, a Purple Heart recipient, stood next to President Barack Obama at the White House on the fourth of July as he recognized America’s military for their sacrifices.

Kosek, who earned both her bachelor’s and J.D. degrees from Notre Dame, was deployed to Baghdad on June 8, 2009, to prosecute Iraqi detainees as an Air Force JAG. Fewer than three months into her six-month tour, an explosive device detonated outside the Mine Resistant Ambush Protected (MRAP) vehicle carrying Kosek and several other officers. Shrapnel tore into her leg just below the knee shattering a portion of her tibia and settled millimeters away from a major artery and nerves.

President Obama spoke of Kosek’s bravery while addressing a crowd on the White House lawn on July 4, 2010. View his speech here:

NOTE: The President recognizes Kosek, second from the left on screen, about seven-and-a-half minutes in to his talk.