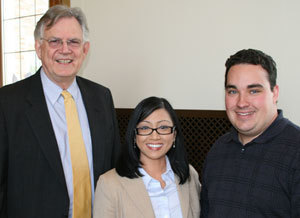 Adrienne M. de la Rosa has been awarded the Peter Lardy Memorial Fellowship for the 2012-13 academic year. Dedicated by the Class of 1975 to the memory of Peter A.R. Lardy and “those who exemplify his Courage, Love, and Understanding toward his fellow man,” the fellowship includes a $20,000 tuition remission for the recipient’s third year of law school.

Ms. de la Rosa hails from Atlanta, Georgia, but grew up in Tampa, Florida. She is a Double Domer, having received her undergraduate degree from the University of Notre Dame in 2003. After graduation, she plans to practice corporate law, with a focus on intellectual property.