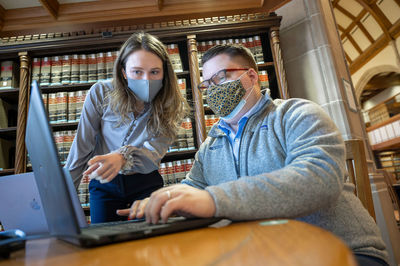 When St. Joseph County Prosecutor Ken Cotter hosted an expungement clinic last year for people with criminal records in the county, he expected maybe a dozen people would show up. When he was wrong about that — and boy, was he wrong — he was grateful for the Notre Dame Law School students who helped him to respond to the situation in a timely manner.

More on that later.

Andre Gammage, an adjunct professor of law at Notre Dame Law School, had been encouraging Cotter to take an active role in the expungement process for years, but Cotter had always resisted. The two serve together on South Bend’s anti-violence task force.

“I always felt it’s not my job; it’s a defense attorney’s job,” said Cotter, a 1990 Notre Dame Law School graduate who has served in the prosecutor’s office, first as a deputy prosecutor, for more than 20 years. “I also thought it was relatively simple for someone else to do.”

He was surprised, then, to learn otherwise when Gammage challenged him to navigate the process on his own.

Originally published by Erin Blasko at news.nd.edu on April 19, 2021.