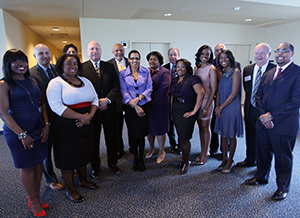 The Hon. Bernard M. Jones, II (J.D. ’04) was presented with the Alvin McKenna Alumnus of the Year Award. Jones is the Judge for Oklahoma’s 7th Judicial District and previously served as president of the NDLS BLSA. The McKenna Award is presented to an alumnus who distinguishes themselves within the African American legal community and through support of BLSA programs and activities.

NDLS Professor Stephen F. Smith was given the Charles F. Crutchfield Award, which honors a current professor who demonstrates a commitment to diversity both in and out of the classroom. Smith’s area of research is criminal law and criminal procedure. He teaches courses on criminal law, criminal adjudication, and federal criminal law.

The BLSA Appreciation Award was presented to NDLS Registrar Anne C. Hamilton. The award recognizes those members of the University, NDLS, and local community who consistently give their time and assistance to the BLSA. Hamilton has previously served as Director of Law Admissions and holds a Master of Fine Arts, and Master of Pastoral Theology.

Current BLSA president Adreanne Stephenson was given the Dwight King Excellence in Service Award. Stephenson has volunteered at organizations through the South Bend, Indiana community including the Big Brothers/Big Sisters of St. Joseph County. She will be serving at the National Black Law Students Association as a convention specialist for the upcoming 2013-2014 term. The King Award is presented to a BLSA member who has devoted considerable time, energy, and attention to both BLSA and NDLA communities.