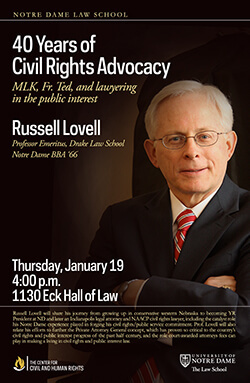 Russell Lovell, ’66 B.B.A., professor emeritus of law at Drake University, will speak to Notre Dame Law students about how they can make a meaningful impact on society over the course of their legal careers. Notre Dame’s Center for Civil and Human Rights will host the event at 4:00 p.m. Jan. 19, in 1130 Eck Hall of Law. Lovell’s talk will also focus on his work on civil rights legal issues.

“Students, including myself when I was young, often assume the only choice is between engaging in public service 100 percent of the time and doing none at all,” Lovell said. “It is a false dichotomy. Those lawyers who commit to 10 percent, 20 percent, to public service can make a real difference — and, importantly, can sustain that level of commitment throughout their careers.”

Lovell’s extensive legal career includes acting as a volunteer National Association for the Advancement of Colored People lawyer, serving as chair or co-chair of the Des Moines NAACP Branch Legal Redress Committee and as a member of the Des Moines NAACP executive board. He served as lead counsel on the NAACP cases that desegregated the Indiana State Police Department in the 1970s and the Des Moines Fire Department in the 1980s He also served as co-counsel on the NAACP case that desegregated the Kansas City school district in the 1990s.

Lovell served as a staff attorney and then director of litigation for the Indianapolis Legal Services Organization and law director for the Indiana Center on Law & Poverty at
the outset of his professional career from 1971-76. He specialized in major civil rights and impact cases in areas of law ranging from consumer protection to school desegregation, from prisoners’ rights to landlord-tenant law reform, from employment discrimination to welfare reform.

“My years as a legal-services attorney in Indianapolis were very rewarding and have greatly influenced my entire career,” he said. “They confirmed my belief that the skills we have as attorneys provide us with a special opportunity, and responsibility, to work for justice and equality.”

His commitment to public service has continued throughout his years in academia, Lovell said. He has been the recipient of five NAACP awards while at Drake, including the prestigious Foot Soldier in the Sand Award at the 2005 National NAACP Convention and Drake University’s Madelyn Levitt Award for Distinguished Community Service.

“We are excited to welcome Professor Lovell back to Notre Dame,” said Nell Jessup Newton, Joseph A. Matson Dean and Professor of Law. “I have followed Russell’s career closely ever since we spent a summer together studying ‘Race, Racism, and American Law’ in Derrick Bell’s seminar. I have always been impressed by his accomplishments and by his dedication to civil rights."

Lovell will also speak on Jan. 20, about the racial integration of the American workplace, at Notre Dame’s Center for Social Concerns’ Higgins Lunchtime Labor Research, Advocacy and Policy Series.