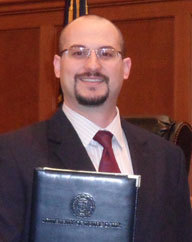 NDLS student Brian Michel recently argued a Miranda violation case before the U.S. Court of Appeals for the Seventh Circuit. Brian was selected for the honor after competing for an NDLS Moot Court Board position as part of the NDLS Moot Court program. The Moot Court program, which coordinates intramural and intercollegiate competitions in its appellate, trial, and international divisions, is run by NDLS students and overseen by Legal Writing Program Director Christine Venter.

“My client had been convicted of first-degree murder under the accountability theory, and sentenced to 28 years for his role in a Chicago shooting,” Michel said.

“His argument throughout trial was that the police refused to provide him with access to counsel. On appeal, we took the position that the Illinois Appellate Court had failed to look at the totality of the circumstances surrounding my client’s confession when it refused to believe his claims that he had repeatedly requested counsel during his seventeen-hour interrogation.

“Personally, I saw my involvement in this case as the highlight of my time at Notre Dame. It was rewarding to defend my client’s basic right to an attorney, a right which is so crucial to a fair criminal justice system.”

An audio file of Michel’s oral argument in Lawrence Coleman v. Marcus Hardy is available on the Seventh Circuit’s website.

Michel briefed and argued the case under the supervision of Adjunct Assistant Professor Robert Palmer. Palmer is a partner with the Mishawaka, Ind., law firm May Oberfell Lorber, where he specializes in trial and appellate advocacy. He has been taking NDLS students to the Seventh Circuit since 1992, and says NDLS students have handled approximately 50 cases over those years.

The second NDLS student working with Palmer this year is 3L Mitch Ramirez. “I do not yet have a date for my argument,” Ramirez says, “but it will most likely take place after I graduate.” We will follow up with an audio link to the arguments in his case, Alonzo Suggs v. United States of America, as soon as it is available.