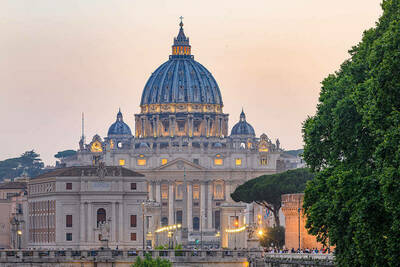 The summit’s theme is Dignitatis humanae — the Second Vatican Council’s declaration on religious freedom that spelled out the Catholic Church’s support for the protection of religious liberty and set the ground rules for how the Church would relate to secular states.

“Everyone around the world has the God-given right to live their lives as their beliefs require — proudly and without fear,” Cole said. “The Religious Liberty Initiative at Notre Dame Law School has the potential to change the world by promoting and defending freedom of conscience for people and institutions around the world.”

Join the Religious Liberty Initiative’s mailing list to receive news and updates, including links to the videos recorded at the summit.

Established by Dean Cole in 2020, the Notre Dame Law School Religious Liberty Initiative promotes and defends religious freedom for people of all faiths through scholarship, events, and the Law School’s Religious Liberty Clinic. The initiative protects the freedom of individuals to hold religious beliefs as well as their right to exercise and express those beliefs and to live according to them.

The summit will stimulate conversations between scholars, advocates, and religious leaders about the future of religious liberty in the United States and around the world.

Although in-person attendance at the summit is by invitation only, the schedule will include several panel discussions and speeches that will be recorded and available for the public to view on Notre Dame Law School’s YouTube channel.

The 2022 Notre Dame Prize for Religious Liberty will be presented to Mary Ann Glendon, the Learned Hand Professor of Law, emerita, at Harvard Law School and former U.S. ambassador to the Holy See. Glendon is being honored for groundbreaking legal scholarship as well as her distinguished service to the United States and the Catholic Church — all of which have had a global impact by affirming religious freedom as a fundamental human right.

Steven Smith, professor of law and co-executive director of the Institute for Law & Religion at the University of San Diego School of Law, will receive the Religious Liberty Initiative’s 2022 Award for Scholarship.

Another highlight of the summit will be the keynote discussion on July 22 between two of the world’s foremost philosophers and public intellectuals — Cornel West of Union Theological Seminary and Robert P. George of Princeton University.

The following events will be recorded at the Religious Liberty Summit and posted on the Law School’s YouTube channel for the public to view.