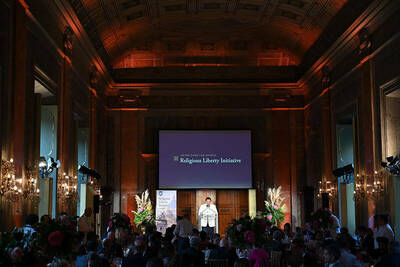 Before I say another word, I want to give all glory and honor to God. I give thanks for the University of Notre Dame and its president, Fr. John Jenkins, who have given us an opportunity to build the Religious Liberty Initiative, and to assemble a structure to fight for religious freedom. I want to thank all of those who have made this moment possible. I am deeply grateful to the Moroun Family of Michigan for trusting us with the resources to make us a real force for religious freedom. Their generosity made it possible for me to fly out to Provo, Utah, and present my vision to Professor Stephanie Barclay. I am grateful to Stephanie for believing in that vision, and taking a leap of faith that together, we could build a truly unique institution.

I am grateful to the team that Stephanie assembled. When we stole John Meiser away from his clerkship with Judge Diarmuid O’Scannlain, we had no way of knowing that he would be such a gifted litigator, teacher, and dedicated deep thinker in the fight for religious freedom. It is not hyperbole to suggest that the success of the first year of the Notre Dame Religious Liberty Clinic, with student briefs in 10 cases, including five in the Supreme Court of the United States, was largely due to John Meiser’s skill, hard work, teaching ability, and dedication. I am truly grateful to you, John, for all that you have done.

When I accepted my appointment as dean of Notre Dame Law School, I promised our president, Father John Jenkins, that I would found a Religious Liberty Clinic. I believe that, as the leading Catholic institution in the United States, Notre Dame must not only be in the discussion regarding religious liberty, we must lead the fight to preserve, protect, and defend it.

I believe that the Notre Dame Religious Liberty Initiative brings a unique structure to the fight for religious freedom. The mission of the Notre Dame Religious Liberty Initiative is to promote human flourishing by serving as a source of advocacy, counsel, scholarship, training, fellowship, and hope in defense of the fundamental human right to the freedom of religion or belief for all people.

To achieve this mission, the Notre Dame Religious Liberty Initiative is comprised of several components, each of which is directed at one or more of our three strategic goals, namely,

The core of the Religious Liberty Initiative is the Notre Dame Religious Liberty Clinic. The clinic is designed to engage in advocacy though litigation at every level, and in every court system. In the clinic, Notre Dame graduate law students handle a range of cases on behalf of clients from a broad range of faith traditions and across the political spectrum. We have represented indigenous tribes in Arizona against mining interests hoping to take and desecrate their sacred lands, Oak Flats. One of our clients, Grandmother Mona Polacca is here with us tonight. We also represented Muslim organizations in New York who were standing up for the rights of Orthodox Jews facing discriminatory COVID restrictions.

Incidentally, that is my favorite case, because I think that it says a lot about who we are: A Catholic law school, with a clinic headed by a director who is a member of the Church of Jesus Christ of Latter-day Saints, supervising students who are Catholic, Jewish, and atheist, representing a Muslim organization, standing up for the rights of Orthodox Jews. God bless America!

A second component of the Notre Dame Religious Liberty Initiative is our Program on Church, State & Society, led by Professor Rick Garnett. That program provides deep legal instruction and training for the top students interested in law and religion. These students are chosen through a highly selective process, and most are given full scholarships to attend Notre Dame Law School. Many of these students also participate in the Notre Dame Religious Liberty Clinic.

A third component of the Religious Liberty Initiative is our Religious Liberty Scholars. These include members of the Notre Dame Law faculty, as well as scholars from across the University of Notre Dame, in political science, theology, philosophy, business, and even the School of Architecture. These scholars bring their expertise to bear on questions of religious liberty.

One of the most important components of the Notre Dame Religious Liberty Initiative is our Religious Liberty Summit. These summits are designed to be held annually, leveraging the global footprint of the University of Notre Dame to highlight the global nature of the threats to religious liberty. I am so grateful that you all have joined us here in Rome, and it is my sincere hope that you will all join us next year at the 2023 summit at our London Law Centre in Trafalgar Square.

So why are we doing this? Why are we here in the heat of the Roman July, discussing the issues and challenges confronting religious freedom? The reason why we are here can be illustrated with a story, one that is familiar to many of you, but which I think about often.

On June 4, 1999, an elderly Catholic priest quietly walked, with a dozen of his parishioners, from his church to a park, where he proceeded to pray. That priest was Joseph Cardinal Zen, the Roman Catholic Archbishop emeritus of Hong Kong. He walked into a park on that day to pray for the souls of the estimated 3,000 people killed in the massacre at Tiananmen Square on that date 10 years earlier. He also prayed for the souls of the Chinese soldiers who killed their fellow citizens, and for the souls of those who ordered the killing.

Cardinal Zen responded by protesting the change. Again, he led a prayer walk to the park on the anniversary of the Tiananmen Square massacre. This time dozens more people joined him in prayer.

Today, what we know of as Hong Kong’s “umbrella movement” began with a simple prayer by an elderly Catholic priest. That prayer was fueled by his faith. His faith — the one I happen to share — gave him a conscience. That conscience told him that what he witnessed at Tiananmen was evil. That conscience gave him compassion for the victims.

That conscience makes him dangerous.

Just two months ago, on May 11, the Chinese authorities arrested a 90-year-old Joseph Cardinal Zen.

What makes a 90-year-old Catholic priest so dangerous? What weapon did he wield that threatens one of the most powerful armies the Earth has ever known?

The weapon which the Chinese authorities fear is that conscience.

The crackdown and repression of the people of Hong Kong today started with a prayer. And now the 90-year-old priest who led that prayer has been deemed so dangerous by the Chinese authorities that they found it necessary to lock him up.

I do not know Cardinal Zen personally; in fact, I have never met nor spoken with him. Nevertheless, I am certain of one thing: no Chinese prison cell, chains, locks, or handcuffs is going to stop him from praying.

Cardinal Zen’s story should be instructive to us. Government actors know that if people have freedom of conscience — freedom to read, pray, believe, and act upon those beliefs — then corruption, injustice, and abuses of power will be exposed.

This is why it is the first freedom that authoritarian regimes attack.

This is why it is the first freedom we must protect.

To protect it, we must accomplish three things.

First, we must strategically identify and neutralize the immediate threats to religious liberty. This is why we engage in advocacy, done through our Religious Liberty Clinic and partners like Becket.

Second, as Archbishop Angaelos said in his remarks this morning, we must change the narrative. We must move from a posture of defensiveness to one of the pursuit of the common good. As President Oaks said yesterday, we must demonstrate the good that religion and people of faith do throughout our communities. Doing so will help us with the third key.

Third, we must educate the public — our fellow citizens — of why religious freedom and freedom of conscience is important to them, whether they are people of faith or not. But especially if they are not people of faith. We must communicate the message illustrated by the story of Cardinal Zen. We must get others to understand why freedom of religion is essential to all of our freedoms.

At the end of the day, legal victories in court are not enough. They will last only as long political winds allow, which will be all too short if we do not also win in the court of public opinion. President Lyndon Johnson once said something similar when he said that, instead of winning an argument, he would much rather win a convert. Those of us who understand the fundamental importance of religious liberty to our survival and to our souls must persuade to win converts. In the Gospel of Matthew, Chapter 28, verses 19 and 20, my Lord Jesus Christ commanded me to “go and make disciples of all nations,” ... and to “teach them to obey everything I have commanded you.” As a Christian and as a Catholic, I ask myself, how can I do this, if I cannot witness my faith, through my actions and my words? In short, we must defend religious freedom, in the United States and around the world, because our very souls depend upon it. And so does the freedom of the world. Thank you.