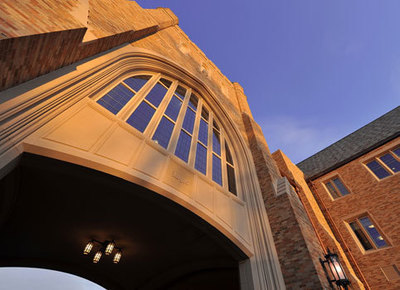 We’ve already assembled the first cohort of five students. This semester, these students have already helped write briefs filed in the Northern District of New York, the Second Circuit Court of Appeals, and the U.S. Supreme Court, defending the rights of Muslims, Evangelicals, and Orthodox Jews. These students are also providing research to lay the foundation for the strategic vision for the Religious Liberty Clinic.

Meet the first group of outstanding students participating in the Religious Liberty Initiative this year.

Aly Cox is from Indianapolis, Indiana. She graduated from the University of Notre Dame in 2017 with a major in Biological Sciences and minors in Theology and Catholic Social Tradition. Before law school, she worked as a research assistant for Professor O. Carter Snead. Aly spent her 2L summer at Gibson Dunn in Washington, D.C., and her 1L summer at the Becket Fund for Religious Liberty. She has also been heavily involved in the Sorin Fellows program, Jus Vitae, and the Future Prosecuting Attorney’s Council. In her free time, Aly enjoys Notre Dame football, true crime, The Office, and spending time with friends. After graduation, Aly will be clerking for Judge William H. Pryor on the Eleventh Circuit and Judge Amy C. Barrett on the Seventh Circuit.

Alexandra (Allie) Howell grew up near Flint, Michigan. She graduated from Hillsdale College in 2018 with a degree in economics and mathematics. During her 1L summer, Allie worked as a Dave Kennedy Fellow for the Institute for Justice in Arlington, Virginia. This past summer, Allie worked (virtually) for McDermott, Will & Emery. She is the President of the Notre Dame Law Federalist Society. After graduation, Allie will be clerking on the Seventh and Eighth Circuit Courts for Judge David Stras and Judge Diane Sykes, respectively.

Daniel Judge was born and raised in Berryville, Virginia. In 2016, he earned his bachelor’s degree in Political Philosophy, Policy, and Law from the University of Virginia, where he graduated with high distinction. During his 1L summer, Daniel worked as a legal intern for the Becket Fund for Religious Liberty. For his 2L summer, he worked as a summer associate at Jenner & Block LLP in Chicago. After graduation, he will clerk on the U.S. Court of Appeals for the Seventh Circuit for Judge Michael Brennan.

Dan Loesing grew up in Columbus, Ohio, and graduated from the University of Notre Dame with a B.A. in Philosophy in 2018. He spent time as a teacher's aide in a high school Latin class before returning to Notre Dame Law School in the Class of 2022. During his 1L summer, Dan interned at the religious liberty firm Becket, and worked in his spare time as a research assistant for Professor Jeff Pojanowski. At ND Law School, he serves as the Spiritual Chair of the St. Thomas More Society and as a Staff Editor of the Notre Dame Law Review. In his free time, Dan enjoys reading and playing clawhammer banjo. He will return to Columbus for a year after graduation to clerk for Judge Eric Murphy of the U.S. Court of Appeals for the Sixth Circuit.

Hadyn Pettersen grew up in Glendive, Montana, and is the son of a dryland wheat farmer. In 2018, he earned his bachelor’s degree in History and Medieval Studies from the University of Notre Dame, where he graduated cum laude. During his 1L summer, Hadyn worked as a research assistant to Professor O. Carter Snead, and he was a summer associate during his 2L summer for the Washington, D.C., office of Kirkland & Ellis. In his free time, Hadyn enjoys golf, pinochle, and roaming the badlands of Montana and North Dakota. Following graduation, Haydn will be clerking for Judge Stephen Clark on the Eastern District of Missouri.

In addition to our students, meet our first Distinguished Graduate Fellow.

Brent Murphy is an incoming associate at Latham & Watkins LLP in Washington, D.C., and a Distinguished Graduate Fellow with the Religious Liberty Initiative. Brent previously clerked for Judge Amy Coney Barrett of the U.S. Court of Appeals for the Seventh Circuit and Judge Paul J. Kelly Jr. of the U.S. Court of Appeals for the Tenth Circuit. He is a 2018 graduate of Notre Dame Law School, where he was editor-in-chief of the Notre Dame Law Review and received the Hoynes Prize. He received his B.A. in Political Science from the University of Notre Dame. He will be working with the Religious Liberty Initiative this fall, alongside Professor Stephanie Barclay, to help with drafting and filing our first Supreme Court amicus brief.