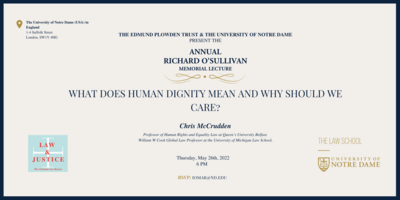 International human rights purport to be based on the principle of “human dignity”, and references to it are now commonplace in political discourse and judicial opinions throughout the United Kingdom, Europe, the Commonwealth, North and South America, and the Global South. For such an omnipresent and core idea, “human dignity” has become more, not less, controversial since its inclusion in the Universal Declaration on Human Rights in 1948.

What does “human dignity” mean? What hangs on the different meanings that have been attributed to it? And why is it so controversial, both from the Left and the Right, from religious adherents and proponents of secularism? Based on recent examples, the lecture explores what these debates say about the contested understanding of human rights, and indeed what it means to be human, in our current political and legal systems.

Professor McCrudden was elected a Fellow of the British Academy in 2008, and elected a Member of the Royal Irish Academy in 2018. In 2011, he was awarded a prestigious Leverhulme Major Research Fellowship for three years. During 2013–2014, he was a Fellow at the Straus Institute for the Advanced Study of Law and Justice at New York University Law School. He is chair of the Advisory Committee of the Institute for Advanced Studies (the Wissenschaftskolleg) in Berlin, where he was a Fellow during 2014-15. He was awarded the honour of Commander of the British Empire by Her Majesty, the Queen, for services to human rights law in the 2019 New Year’s Honours List.Christopher McCrudden has been professor of human rights and equality law at the School of Law, Queen’s University Belfast since 2011, when he returned to Queen’s, and holds the visiting position of L. Bates Lea Global Law Professor at the University of Michigan Law School. He was formerly Professor of Human Rights Law at Oxford University (the first), and a Fellow of Lincoln College, Oxford.

Specializing in human rights, he concentrates on issues of equality and discrimination, the relationship between international, European, and comparative human rights law, and most recently the effect of the UK’s withdrawal from the EU on the law and politics of Northern Ireland. Professor McCrudden is the author, most recently, of Litigating Religions: An Essay on Human Rights, Courts and Beliefs (OUP, 2018), about the relationship between religion and human rights law. An earlier book, Buying Social Justice (Oxford University Press, 2007), examined the relationship between public procurement and equality, for which he was awarded the certificate of merit by the American Society of International Law in 2008. He has co-authored (with Brendan O'Leary) Courts and Consociations (Oxford University Press, 2013), about the tensions between human rights and ethnic power-sharing arrangements that are common in peace agreements.