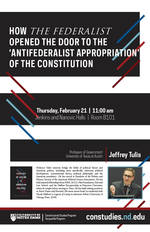 “How The Federalist Opened the Door to the ‘Antifederalist Appropriation’ of the Constitution” with Jeffrey Tulis (University of Texas at Austin).

Lecture will begin at 11:00 am in room B101 of Jenkins and Nanovic Halls (basement level, next to elevators)

About the speaker:
Professor Jeffrey Tulis is professor of government at the University of Texas, Austin.  Prof. Tulis’s interests bridge the fields of political theory and American politics, including more specifically, American political development, constitutional theory, political philosophy and the American presidency.  He has served as President of the Politics and History Section of the American Political Science Association. He received the President’s Associates Teaching Excellence Award at the University of Texas. His most recent book (co-authored with Nicole Mellow) is Legacies of Losing in American Politics (Chicago, 2018).