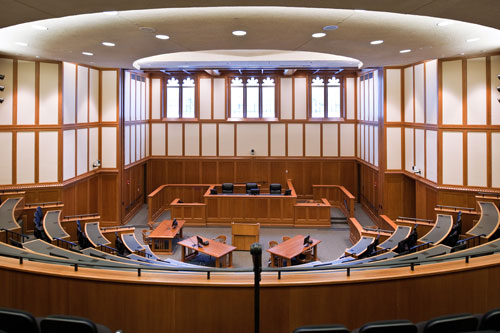 In the early months of 2011, citizens from across socioeconomic and political spectra began to “occupy” public locations in major cities to petition for redress of harsh economic conditions and vast wealth inequality. The City of New London’s citizens gathered in Hide Park. Occupy Hide Park was a peaceful demonstration led by three central characters, one of whom was Matthew Phelps. Phelps, who represented himself as a retired civil servant, was actually an undercover police officer with the City of New London Police Department (NLPD). He infiltrated the group of citizens to monitor them.

Phelps was frequently videotaped and recorded when in public, especially when giving speeches or announcing information regarding the group’s activities. On September 28, 2011, the Respondent, Michael Franklin, was making a video recording of Phelps as he conversed with a uniformed officer. The Petitioner, Officer Bryan Lockte, was assigned to protect Phelps, and saw Franklin taping him with a personal cell phone. He suspected that Franklin was going to use the video to expose Phelps as an undercover officer and approached Franklin to stop him. He asked Franklin if he had consent to tape Phelps and the other man, to which Franklin answered, “He is in a public place and people have been videotaping him for weeks. Why would I need permission?” Petitioner Lockte ordered Franklin to stop recording, at which point Franklin responded, “Wait, a minute, he is one of you.” The Petitioner grabbed Franklin’s phone from his hands and searched through it for the video recording. He saw that Franklin was about to post the video to 99 percent.com, a website used to share information among the demonstrators. The Petitioner believed that Occupy movements in other cities were becoming violent, and worried that revelations of Phelps’ duplicity would jeopardize his safety amid the otherwise peaceful Occupy Hide Park group. He arrested Franklin for violating the City of New London’s wiretapping statute. Franklin did not resist the arrest.

The New London District Attorney dropped all charges against Franklin. On November 3, 2011, Franklin sued the Petitioner in federal court under 42 U.S.C. § 1983, alleging that he violated the First and Fourth Amendments by arresting Franklin for openly recording two police officers carrying out their duties in public, and by seizing and searching his private cell phone without a warrant.

THE HONORABLE ADALBERTO JOSÉ JORDÁN
Judge Adalberto Jordán was appointed to the United States Court of Appeals for the Eleventh Circuit by President Barack Obama. He assumed office in February 2012. Judge Jordán has been an adjunct professor at his alma mater the University of Miami Law School since 1990. Judge Jordán began his legal career by clerking for Judge Thomas Alonzo Clark on the Eleventh Circuit Court of Appeals in Atlanta, Georgia from 1987 to 1988, and Justice Sandra Day O’Connor on the United States Supreme Court from 1988 to 1989.

Upon returning to Miami in 1989, Judge Jordán worked as a litigation associate for Steel Hector & Davis International before being made a partner in 1994 when he began his focus on appellate practice. In 1994, Judge Jordán also returned to public practice working for the United States Attorney’s office until he was appointed to United States District Court of the Southern District of Florida by President Clinton in 1999.

THE HONORABLE FREDERICK J. Martone
Judge Frederick J. Martone was appointed by President George W. Bush to the United States District Court for the District of Arizona in 2002. Martone began his legal career as a law clerk for Judge Edward F. Hennessey of the Supreme Judicial Court Judge of Massachusetts. In 1973, he entered private practice with Jennings, Strouss & Salmon in Phoenix, Arizona. He served as a judge in the Arizona Superior Court, Maricopa County, from 1985-92 and was later a justice on the Arizona Supreme Court from 1992-2002.

Judge Martone graduated with a B.S. from College of the Holy Cross in 1965, and served as a captain in the United States Air Force from 1965-69. A 1972 Notre Dame Law School alumnus, he also earned an LL.M. from Harvard Law School in 1975. Judge Martone is currently a member of the American Judicature Society and an adjunct professor at Arizona State University School of Law.

THE HONORABLE MARY KATHERINE ROCHFORD
Judge Mary K. Rochford was elected to the Illinois Appellate Court (1st District, 1st Division) in November 2010. She has been a member of the judiciary since February 1991, having previously served as both an associate judge and an elected judge of the Circuit Court of Cook County.

A “Double Domer,” Judge Rochford earned a Bachelor of Business Administration at Notre Dame in 1976 before graduating from the Law School with a J.D. in 1979.