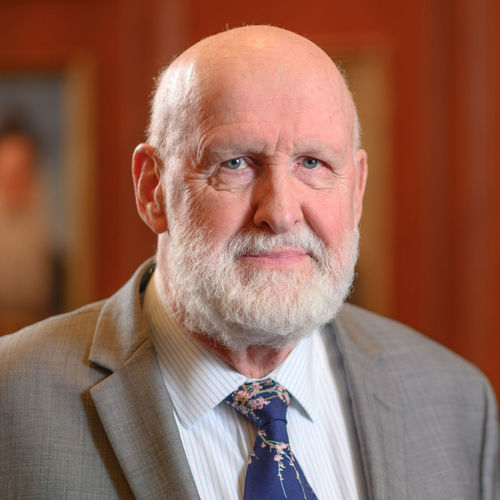 John H. Robinson has been a member of the faculties of the Notre Dame Law School since 1983 and the University’s Department of Philosophy since 1981, becoming an associate professor of law in 1998 and earning tenure in 1999. In addition to teaching, he directed the Law School’s Thomas J. White Center for Law and Government (1986-87 and 1988-97), and from 1994 to 2016 served as faculty editor for the Journal of College and University Law, the scholarly publication of the National Association of College and University Attorneys. He served as associate dean for academic affairs from 2002 until 2004, and he served as executive associate dean from 2004 until 2009. He earned his A.B. from Boston College in 1967, his M.A. and Ph.D. from Notre Dame in 1972 and 1975, respectively, and his J.D. from the University of California at Berkeley in 1979. He has been a member of the Rhode Island Bar since 1980. He taught philosophy as an assistant professor at the University of San Francisco (1973-76), served as an instructor of law at the University of Miami (1979-80) and clerked at the U.S. District Court for the District of Connecticut (1980-81).

Robinson’s areas of academic interest include civil procedure, jurisprudence, and trusts and estates. He has a special expertise in the law of death and dying. In addition, he has been a member of the Human Rights Committee of the Logan Center in South Bend, Indiana, since 1989.

A Symposium on the Implementation of Ex Corde Ecclesiae: Introduction, 23 Journal of College and University Law 645 (1999).

Unraveling the Codes: The Dialectic Between Knowledge of the Moral Person and Knowledge of the Genetic Person in Criminal Law, chapter 14 of Mutating Concepts, Evolving Disciplines: Genetics, Medicine, and Society 75, co-authored, with R.M. Berry, (Kluwer Academic Publishers, 2002).