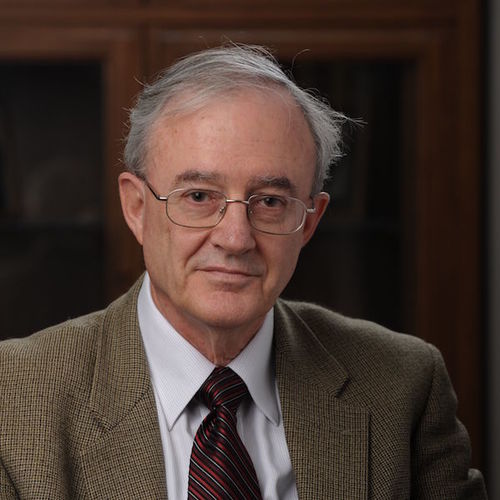 John Finnis moved to emeritus status after the 2019-2020 academic year.

Known for his work in moral, political and legal theory, as well as in constitutional law, John Finnis joined the Notre Dame Law School faculty in 1995. He earned his LL.B. in 1961 from Adelaide University (Australia) and his doctorate in 1965 from Oxford University as a Rhodes Scholar at University College Oxford. He was lecturer, then reader and then a chaired professor in law in the University of Oxford for over four decades until 2010, while also a tutorial fellow of University College Oxford. He was associate in law at the University of California at Berkeley (1965-66), the professor of law at the University of Malawi (Africa) (1976-78), and Distinguished Visiting Professor of Law at Boston College Law School (1993-94). A barrister of Gray’s Inn, he practiced from 1979 to 1995 and was appointed Queen's Counsel [QC] (honoris causa) in 2017.

Judicial Power and the Balance of Our Constitution (London: Policy Exchange, 2018)

I Reason in Action

“Where the Pell Judgment [of the Court of Appeal of Victoria] Went Fatally Wrong”, Quadrant 8 September 2019

“The Unconstitutionality of the Supreme Court’s Prorogation Judgment, with Supplementary Notes."

“Intentional Killing is Always Wrong: the development initiated by Pius XII, made by John Paul II and repeated by Francis”, Public Discourse 22 & 23 August 2018

“Intentional Killing is a Usurpation of God’s Lordship over Human Life: a Reply to Edward Feser”, Public Discourse 15 December 2018

“Judicial Law-Making and the ‘Living’ Instrumentalisation of the ECHR” in NJ Barber, Richard Ekins and Paul Yowell (eds), Lord Sumption and the Limits of the Law (Oxford: Hart Publishing, 2016), 73-120

“The Misuse of Amoris Laetitia to Support Errors against the Catholic Faith” (with Germain Grisez),