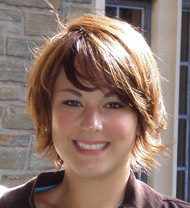 Amelia Yowell, J.D. ’11, has been selected as the 2015-2016 Supreme Court Fellow assigned to the Administrative Office of the U.S. Courts.

She will begin her fellowship in the fall after completing her current judicial clerkship with Judge Mary H. Murguia of the U.S. Court of Appeals for the Ninth Circuit.

NDLS faculty remember her well and fondly, including Professor Jennifer Mason McAward, who teaches civil rights and constitutional law and is the acting director for the Center for Civil and Human Rights.

“Amelia is smart, thoughtful, and engaged in the life of the law,” she said. “I feel lucky to have had her as a student. She will be a terrific Supreme Court Fellow.”

Before her clerkship with Ninth Circuit Judge Murguia, Yowell clerked for Judge Julia Smith Gibbons of the U.S. Court of Appeals for the Sixth Circuit and served as a Commercial Litigation Associate at Foulston Siefkin LLP.

“I’m so proud of Amelia and of all the outstanding faculty who supported and worked with her,” said Dean Nell Jessup Newton. “Amelia’s career is off to a terrific start and I am very confident that the best is yet to come.”

The Supreme Court Fellows Program she will be joining this fall was created in 1973 by the late Chief Justice Warren E. Burger to provide promising individuals with a first-hand understanding of the judicial branch. In the words of Chief Justice John G. Roberts, Jr., the program offers “a unique opportunity for exceptional individuals to contribute to the administration of justice at the national level.” Each fellow is selected by a commission composed of nine members appointed by the Chief Justice of the United States.

With assignments at the Supreme Court, the Federal Judicial Center, the Administrative Office of the U.S. Courts, and the U.S. Sentencing Commission, fellows work with top officials to examine the federal judicial process and propose and implement solutions to problems in the administration of justice.