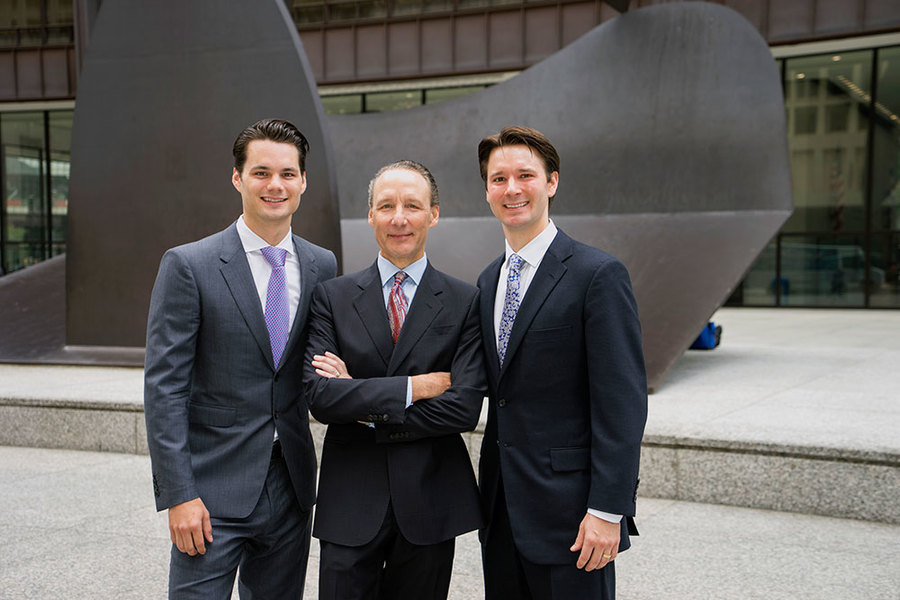 Trial lawyer Patrick Salvi Sr., ’78 J.D., has scored many 8-figure outcomes over the course of his 37-year career, but a $17.9-million Cook County jury verdict in March of this year will always hold special significance for him. That’s because the winning three-member trial team in that case was an all-Salvi affair of NDLS alums.

Patrick Salvi II, ’07 J.D., and his brother, Brian ’09 BA, ’13 J.D., had joined their father’s Chicago-based firm right after law school. And while the senior Salvi had handled cases with one or the other of his sons, the recent big win in Cook County was the first time he’d done so with both.

“Watching my sons do so well in a high-stakes jury trial and experiencing the victory together after all of the work and angst was wonderful,” he said. “Most importantly, our client was so grateful and pleased with the verdict, and this all resulted from Patrick and Brian’s hard work and talents.”

Ask the Salvis if there is a particular family-born style that has proven successful in their plaintiff’s personal-injury work, and they point to a shared love of competition. Patrick Salvi, Sr., and his wife, Lindy, raised five athletic boys, four of whom would go on to Notre Dame and two of whom (Chris Salvi and Will Salvi, both ’13) would play football for the Fighting Irish. But there was apparently plenty of verbal and intellectual tugs-of-war in the Salvi household as well.

“It kind of started at the dinner table,” Brian Salvi said. “It had to do with the way you approach something that is intellectually challenging, how you break things down and dissect them, how you articulate and put forth your position. Ultimately, that’s what we do as lawyers, but I can remember being unintentionally trained to think like that in arguing things like, ‘Which is the best NBA basketball team in history?’”

Patrick Salvi II jokes that he decided to follow in his father’s footsteps only after he realized that his goal of playing quarterback for the Chicago Bears was not realistic. But he makes it clear that he loves winning as much as ever.

“We get to present cases that make a profound statement in our community and what compensation ought to be for human suffering,” he said. “We are the ones who hold corporations, insurance companies, the medical profession and others responsible in the event that they negligently—or, worse, willfully—harm other human beings.”

Patrick Salvi, Sr., launched the law practice now known as Salvi Schostok & Pritchard in 1982 after working in his own father’s law firm for three years. Albert Salvi had a solo general practice in Waukegan and Patrick Salvi focused his work on criminal cases because they provided him the quickest way to get into the courtroom.

“It was great experience,” he recalled, “but the practice was difficult in that, one, your clients are criminals, and two, in the overwhelming majority of cases they’re guilty.”

After going solo and switching his attention to plaintiff’s personal-injury cases, Salvi slowly built his practice. Within a few years, he was hiring associates, and in 1989 he hired Michael Schostok, who would become his first partner. (Schostok died in 2012 at age 51.) As the firm’s reputation grew, so did its ability to be selective in the cases it took. In all, Salvi’s firm has secured nearly $1 billion in verdicts and settlements for its clients, including a $33.2-million personal injury verdict in 2009, the first time a Salvi father-and-son legal team did a jury trial. The verdict that Patrick Sr. and Jr. got in that case was the biggest jury verdict ever in Lake County, Ill., eclipsing the previous record by nearly $10 million.

In late August, after a three week trial, the team of Patrick Salvi II and Patrick Sr. obtained a $15.2 million jury verdict on behalf of a man who seriously injured his foot and ankle when he was struck and run over by a forklift at McCormick Place convention center in Chicago.

The incident that would culminate in the recent $17.9-million verdict occurred early on the morning of Oct. 23, 2012, when a 47-year-old school teacher, Teresa Burns, was driving to work and was struck by a left-turning semi in the middle of an intersection. She suffered back injuries that resulted in surgery and rehabilitation and came to the Salvi firm because she believed that the semi driver was at fault for her injuries because he had failed to yield. The semi driver, however, claimed that Burns herself was at fault because she’d run a red light.

When the Salvis reviewed the video from a traffic camera, they concluded that both positions held credence—but that the defendant was more responsible for the accident than Burns was. Both sides negotiated where the line was to be drawn on liability and settled on a 70-30 split, meaning that Burns was 30 percent at fault and that any verdict must be reduced by that percentage.

In preparing for trial, Patrick II was set to join his father in taking a dominant role—both would handle voir dire and present and cross-examine key witnesses while Patrick II would handle the opening and Patrick Sr. would do the closing. Brian Salvi was assigned the task of presenting some of the witnesses.

“Whether it’s three family members or not, you kind of wonder whether three is kind of overkill, but it was a sufficiently complex case,” Patrick Sr. said. “There were a number of witnesses. And we wanted to get Brian more and more experience, so we divvied up things in such a way that he was given some significant responsibility with presenting certain important witnesses.”

The defense had offered a $4-million settlement, but the Salvis thought the case was worth more based on verdicts Patrick Sr. had gotten in previous trials involving similar injuries and facts. As the trial proceeded, for 2 ½ weeks, the defense didn’t budge from its initial offer—until the very end.

“We didn’t get an increase in the offer until we finished closing arguments and were awaiting the verdict,” Patrick Sr. said. “And then the offer went from seven to eight to nine to 10. We turned it down.”

But then the offer jumped to $14 million—and the Salvis decided to accept it.

Both sides had agreed that in the event of a settlement, the jury verdict must still be entered. So when the jury returned with the $17.9 million verdict, the Salvi trial team had scored a big win. The pre-trial agreement of a 30-percent reduction (which the jury was not told about) would have resulted in a net $12.6 million for Burns. The Salvis’ decision to settle at $14 million, therefore, resulted in an additional $1.4 million.

It was the first time that Brian Salvi, a member of NDLS’s 2013 national champion trial-advocacy team, had his name attached to a sizeable jury verdict and he says he’s looking ahead to bigger roles for himself in the courtroom.

“I would say that, for me, the most enjoyable aspect of trying cases is being able to tell someone else’s story,” he said. “When we take on a case, the help we’re able to provide them is by giving them a voice. That’s something I get a lot of enjoyment out of—being able to be that story teller.”

Patrick II said that what he loves about being a trial lawyer is the intellectual breadth it calls upon.

“I love the human aspect of it,” he said. “One of the things that really fascinates me as I’m sitting in my office preparing for a trial is wondering who the jurors are who are going to decide my clients’ fate. And then when you add in the different people—the defense lawyers, the witnesses—really what we do involves all aspects of humanity and human psychology, the way we think and feel and remember and make decisions. All those things are at play at any given moment.”

For the senior Salvi, there’s the familial pride of working shoulder-to-shoulder with his sons in the courtroom. But there’s also the pride that comes from the fact that all three are NDLS alums. Salvi’s connection to the school is a strong one—he has been an adjunct professor teaching personal-injury litigation to 2Ls and 3Ls since 2008 and has chaired the Notre Dame Law School Advisory Council since 2010.

“Notre Dame provides great broad training in terms of educating the lawyer, but they are particularly good at their trial advocacy,” he said. “They turn out a lot of terrific trial lawyers.”

Three of whom are two generations of Salvis.

In addition to being a huge Fighting Irish sports fan, Patrick Salvi, Sr., is passionate about baseball and since 2008 has been operating a side enterprise devoted to operating independent minor-league teams.

Independent minor leagues are those that are not affiliated with major-league teams, which operate their own “farm systems” of minor-league teams. Team owners make their money through ticket and concession sales, but also by selling the contracts of their most productive players to major-league systems.

In 2008, Salvi bought the Gary SouthShore RailCats, a franchise in the independent American Association, and in 2012 he bought the Schaumberg Boomers in the Frontier League. His Salvi Sports Enterprises operates both teams as well as a summer collegiate wood-bat team in Lynn, Mass.

He is on the board of directors of each league and is on the executive committee of the American Association.

While his involvement in baseball is a business, Salvi says that its primary purpose is the enjoyment it provides him.

“My first and foremost passion is being a trial lawyer,” he said. “But it’s a lot of fun and I enjoy the business of sports and the business of participating in the league.

“I don’t get all caught up in the panache of independent versus affiliated—but I do like the players working for me instead of the Cubs or the Reds.”