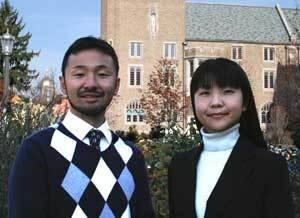 Noting that Japan only recently adopted some jury-like procedures, and then only for its most serious criminal trials, both Judge Yamade and Mr. Yokoyama expressed a special interest in studying the U.S. jury system during their Notre Dame appointments.

“In Japan,” Judge Yamade explained, “the saiban-in system, which is somewhat akin to a jury system, was implemented in May 2009. In the saiban-in system, citizens called saiban-in (“lay judge”), who are randomly selected out of the electoral registry, take part in criminal court trials of certain severe crimes and make decisions together with professional judges both on guilt and on the sentence.”

Likewise, Mr. Yokoyama said, since Japan has relatively little experience working with jurors, “I would like to learn how prosecutors persuade a jury in the U.S., where the Constitution guarantees the jury.”

The newest visiting scholar appointments extend through May 2011.