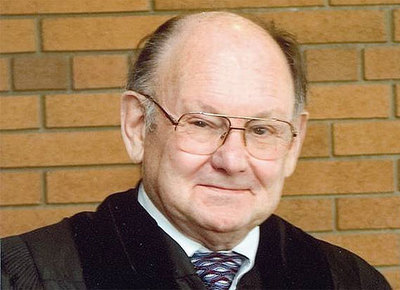 On April 8, dozens of friends, colleagues, and former students gathered at Notre Dame Law School to celebrate the life and work of Professor Emeritus and former Dean Thomas L. Shaffer.

The evening began in the St. Thomas More Chapel, with Mass said by Shaffer’s colleague and friend Fr. E. William Beauchamp, C.S.C. Guests then gathered in the Law School’s Commons to join Shaffer’s wife, Nancy, and their children in sharing stories and memories. Some of the attendees had traveled from across the country to be here while others, including Professors Rick Garnett, Christine Venter, and Judy Fox, are still with the Law School. They each recounted how they had come to know and love Tom Shaffer.

After Dean Nell Jessup Newton welcomed the group, Professor Garnett related how he was introduced to Shaffer through an essay of his that he was assigned to read when he was a student at Yale Law School. Garnett explained that Shaffer’s article contended that what was going by the name “legal ethics” was not telling the truth about the nature and destiny of humans as “dependent and loved creatures, friends and parents, neighbors and colleagues” but rather imagining that attorneys were “autonomous, independent, untethered interest-calculators.” This essay led Garnett to read Shaffer’s books and informed his seminar paper on the ethical challenges facing attorneys when representing so-called death-row “volunteers” -- prisoners who do not want to challenge their death sentences. Afterward, Garnett decided to send his paper to Shaffer at Notre Dame. To his surprise, Shaffer replied with “a three-page, single-spaced letter with helpful feedback, comments, and encouragement. I was so happy to be able thank him, five years later, when I came to Notre Dame to be his colleague.”

Professor Christine Venter met Shaffer when she was a student in the Center for Civil and Human Rights working on her doctoral degree. One of her dissertation committee members fell ill and Shaffer agreed to serve in his place even though he had no expertise in the subject matter of her dissertation (women’s rights in Africa) and would have to devote considerable time to get up to speed. Shaffer proceeded to astonish her with the depth with which he mastered the issues -- and by his eagerness to continue discussing them with her for months after her successful dissertation defense. Venter joined three other women to work with Shaffer in Notre Dame’s Legal Clinic. “I don’t know if Tom ever referred to himself as a feminist,” she said, “but I am going to claim him as one in the best sense of the word” as he served as the clinicians’ advocate and even described in an article how he had been struck by “the experience of working in a feminine place, of dealing with things from a feminine perspective.” Venter said that although she has read all of his books, “whatever I have learned about what it means to be a Christian and a lawyer I did not learn from Tom’s books or his scholarship; I learned from being in his presence. We all dearly loved Tom and will miss him.”

Professor Judy Fox first met Shaffer as a 1L law student when she was assigned to his property law class. She later became one of his clinic students, then his research assistant, and then his teaching assistant for the property law class, where “Tom had a gentle way of teaching, always with a twinkle in his eye.” After a short career in legal services, Fox returned to Notre Dame to teach with Shaffer in the clinic. “Working in the clinic every day with Tom was a pleasure,” she said. “It was a laboratory for ideas.  We debated ethics, morality, religion, public policy, Anthony Trollope novels and Mortimer’s Rumpole of the Bailey.” Yet, she said, perhaps the most important thing Shaffer taught her “was that one must always do what is right to do, knowing it is unlikely to make you popular, wealthy or famous.  You need to fight those that oppress the poor, the dispossessed, and the vulnerable.”

Fox seemed to be speaking for everyone in the room when she concluded that, “I will miss him terribly—but he lives on through the hundreds of lives he has touched and the thousands that have been helped as a result.”

After these introductory comments, Dean Newton invited those in attendance to say a few words and many did so, including Shaffer’s NDLS classmates Professor Ivan Bodensteiner, Emeritus Professor of Law at Valparaiso Law School, and former NDLS Dean Fr. David T. Link.

Some of the testimonial remarks from the reception, along with photos and other testimonials sent in by Tom’s friends and admirers, are available in this Spark page: