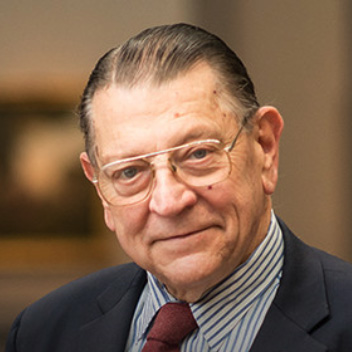 Thanks to a generous donation from Thomas Fortune Fay, Notre Dame Law School is establishing a new fellowship for students interested in practicing in the field of national security law.

Fay, a 1961 graduate of the University of Notre Dame, is a distinguished lawyer and trial litigator who has devoted his career to pursuing justice for American victims of terrorism.

“There is no greater calling than to use your legal knowledge and training to protect the homeland, including from state-sponsored terrorist attacks,” Fay said. “It’s my hope that this fellowship will encourage law students to pursue a career in this important area of law.”

The fellowship will be named the Thomas F. Fay-Jimmy Gurulé National Security Fellowship to honor Notre Dame Law Professor Jimmy Gurulé, an expert in the field of national security law. Professor Gurulé has served in two presidential administrations and was serving as undersecretary for enforcement at the U.S. Treasury Department when the September 11, 2001, terrorist attacks occurred. In his capacity with the Treasury Department, he was instrumental in developing and implementing the government’s first strategy to combat the financing of terrorism.

The fellowship will support Notre Dame Law students who want to work in the area of national security with a federal agency or nongovernmental organization.

“Tom Fay is a role model for our law students. He has dedicated his career to pursuing justice for the victims of terrorism,” Gurulé said. “Now, through his generosity, Notre Dame Law School can assist in training the next generation of leaders in the field of national security.”

Fay, based in Washington, D.C., has practiced law for more than 50 years and has won judgments totaling $9 billion on behalf of American victims of international terrorism.

He successfully litigated a landmark case on behalf of the families of 241 Marines, soldiers, and sailors who died in the 1983 bombing of a Marine barracks in Beirut, Lebanon. The Beirut Memorial at Marine Corps Base Camp Lejeune in North Carolina honors the victims of the attack. Fay filed a civil lawsuit against Iran on the grounds that Iran provided financial and logistical support to Hezbollah, the terrorist organization that carried out the attack, and received a multibillion-dollar judgment for the victims.

Fay started building the case in the late 1990s. In 2016, in Bank Markazi v. Peterson (No. 14-770), the U.S. Supreme Court ruled in favor of allowing American families of terrorism victims to collect judgments from seized Iranian assets.

Gurulé served as an expert consultant in the case. He also drafted and filed an amicus brief in the U.S. Supreme Court on behalf of a group of senior national security experts.

Fay has supported Notre Dame Law School in the past with the Thomas F. Fay Peace Through Law Endowment for Excellence, which sponsors lectures on national security and counterterrorism.

In 2016, the endowment sponsored a full-day conference on the 15-year anniversary of the 9/11 attacks with high-level speakers such as Ambassador Thomas E. McNamara and Congressman Lee Hamilton. In 2017, the endowment sponsored a panel discussion with three Notre Dame alumni who shared their perspectives on the detention of suspected terrorists at the Guantanamo Bay detention center. Coming up in June, the endowment will co-sponsor an event at the Notre Dame London Global Gateway, where academics, military experts, and government officials will present on cybersecurity and the threat of transnational cyber-attacks.