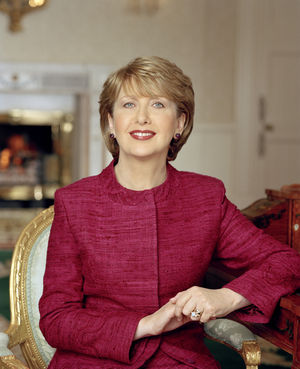 Mary McAleese, former President of Ireland, will have a conversation with the Notre Dame Law School Community titled The Real "Fighting Irish:” Is Peace Here to Stay? Professor Doug Cassel, former Director of the Center for Civil and Human Rights and Notre Dame Presidential Fellow, will moderate the conversation at 3:30 p.m. Monday, April 13, in the McCartan Courtroom in Eck Hall of Law. A reception will follow at 5:00 p.m. in Eck Commons.

Mary McAleese served as the eighth President of Ireland, 1997 – 2011, and was the first Irish President born in Northern Ireland. She received her law degree from Queen’s University of Belfast and practiced as a barrister prior to serving as the Reid Professor of Criminal Law, Criminology and Penology at Trinity College Dublin. She was Director of the Institute of Professional Legal Studies and the first female Pro-Vice Chancellor at Queen’s University of Belfast.

McAleese described the theme of her Presidency as "Building Bridges”, which was reflected in her efforts towards reconciliation and peace building with Northern Ireland. Her ideas and work in this arena were presented in Love in Chaos: Spiritual Growth and the Search for Peace in Northern Ireland; President Mary McAleese: Building Bridges – Selected Speeches and Statements (foreword by Seamus Heaney).

Following her Presidency, McAleese pursued a Licentiate and Doctorate in canon law from Gregorian University (Rome). In 2012 her book on Church governance was published entitled Quo Vadis?: Collegiality in the Code of Canon Law.