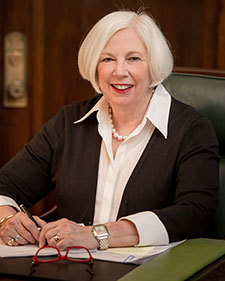 Mooney will be recognized for her devotion and outstanding service to the University of Notre Dame. Throughout her 36 years of service in Catholic higher education, the NDLA Board said, Mooney has displayed a deep commitment to excellence and serving the needs of students.

Mooney graduated from Saint Mary’s College in 1972 with a B.A. degree in English and received her J.D. degree from Notre Dame Law School in 1977. She practiced law from 1977–78 as an associate in the Washington, D.C., office of Jones, Day, Reavis and Pogue.

During her tenure at the Law School, Mooney was a respected and popular professor and was voted Teacher of the Year by Notre Dame law students in 1983.

As a legal scholar, she has co-authored two books and written numerous articles appearing in law reviews and other scholarly periodicals. She has also served as a member of the American Law Institute, and was appointed in 1986 by U.S. Supreme Court Chief Justice William H. Rehnquist to the U.S. Judicial Conference Advisory Committee on Federal Rules of Appellate Procedure.

Mooney took the helm at Saint Mary’s College on June 1, 2004, and was the College’s first lay alumna president. She is scheduled to retire from the position at the end of the 2015-2016 school year.

Under her leadership the College formed three new graduate programs, increased its financial endowment and significantly diversified its student body.

“Carol has enriched generations of Notre Dame law students, Notre Dame undergraduate students, and Saint Mary’s College students with her tremendous teaching abilities and leadership qualities,” said Philip J. Faccenda, Jr., ’89 B.A., ’92 J.D., who sits on NDLA’s Board of Directors. “We are honored to be presenting her with this award.”