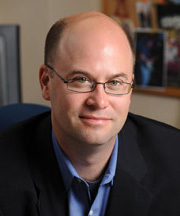 Professor Richard Garnett was interviewed for NPR’s Morning Edition with Nina Totenberg June 28 regarding the Supreme Court’s decision to strike down a California law restricting the sale of violent video games.

On June 9 he was the featured speaker at the Indianapolis Lawyers Division Chapter of The Federalist Society for Law and Policy. Professor Garnett spoke on “School Choice, Religious Freedom, and the Constitution(s).”

On May 7 he delivered a lecture and participated in a subsequent panel discussion on issues regarding school choice for the Notre Dame Club of Fort Wayne’s Hesburgh Lecture Series. 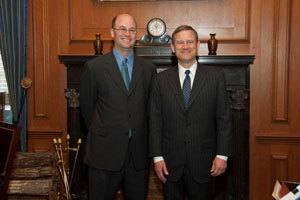 Professor Garnett also lectured on John Kedroff, of Kedroff v. Saint Nichols Cathedral fame, as part of the Supreme Court Historical Society’s 2011 Leon Silverman Lecture Series, “The People Behind the Supreme Court’s Religion Cases.” The lecture was held at the Supreme Court of the United States on May 5 to an audience that included Chief Justice John G. Roberts, Jr. (see photo).

In April, USA Today published “Hosanna-Tabor case to test our church-state divide,” Professor Garnett’s commentary on a case the Supreme Court will hear and decide in the 2011-2012 term, Hosanna-Tabor Evangelical Lutheran Church and School v. EEOC. He also was interviewed by the Chicago Tribune and The Seattle Times regarding the significance of the Supreme Court’s ruling in the Arizona school choice case, Arizona Christian School Tuition Organization v. Winn.

Professor Garnett teaches and writes about the freedoms of speech, association, and religion, and also about constitutional law more generally. His current research project, “Two There Are: Understanding the Separation of Church and State,” will be published by Cambridge University Press. Professor Garnett is the founding director of Notre Dame Law School’s new Program in Church, State, and Society, an interdisciplinary project that focuses on the role of religious institutions, communities, and authorities in the social order.