Professor Paolo Carozza participated in the Second Seminar of the Catholic-Muslim Forum on November 21 – 23, held at the site of Jesus’ baptism in Jordan. 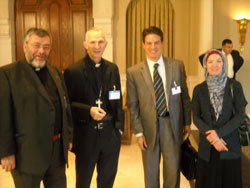 Carozza was one of 24 Catholics invited to attend the seminar by the Pontifical Council for Interreligious Dialogue, headed by Cardinal Jean-François Tauran. Twenty-four prominent Muslim religious leaders and scholars also attended, led by H.R.H. Prince Ghazi bin Muhammad of Jordan.

“The seminar offered us a deep and challenging discussion over three intense days, in which our differences were addressed with sincerity, respect, and friendship, and in which we also found much that unites us, particularly our common acknowledgment that the inviolable, God-given dignity of the human person demands recognition and protection,” Professor Carozza noted afterward. 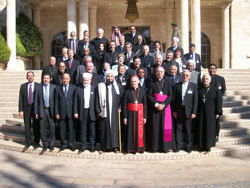 At the conclusion of the Seminar the Forum participants released a Final Declaration that stated matters of agreement and looked forward to continuing the dialogue “as a way of furthering mutual understanding, and advancing the common good of all humanity, especially its yearning for peace, justice and solidarity.”

At NDLS, Professor Carozza is the Associate Dean for International and Graduate Programs, director of the Program on Law and Human Development, and Interim Director of the Center for Civil and Human Rights.