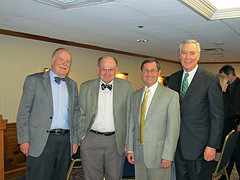 The Notre Dame Law Association has named Thomas L. Shaffer, Robert and Marion Short Professor Emeritus of Law, the 2012 recipient of The Rev. Michael D. McCafferty, C.S.C., Award. The McCafferty award is presented by the association to Notre Dame lawyers — or members of the Notre Dame Law School faculty or administration — who have rendered distinguished service to the University.

The award is named for Fr. Michael McCafferty, a popular and highly respected teacher at Notre Dame Law School whose life was shortened by cancer. The award is presented on occasions when the association’s board deems someone worthy of receiving it.