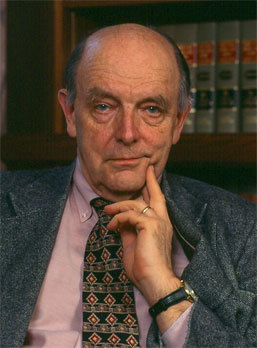 The Catholic Press Association (CPA) of the United States and Canada awarded Notre Dame Law Professor Robert Rodes, Jr., first place in the category “Best Essay, Scholarly Magazines” for his essay titled “On Marriage and Metaphysics.” The piece was published in the Winter 2007 issue of National Catholic Bioethics Quarterly.

The article examines the issue of same-sex marriage through the lens of the judiciary via prior court opinions as well as the scholarly work of philosophers and theologians. Rodes argues that while people have offered many and varied reasons to oppose same-sex marriage, he boils it down to one main point: Men and women are different. “Any enterprise has a different and more subtle coloration if both sexes are involved in it. I call this difference between the sexes metaphysical,” says Rodes. “The term is often difficult to pin down, but I think it is needed here. What I mean by it is pertaining to a reality beyond the physical, one that can be experienced or intuitively discerned, but that cannot be empirically demonstrated.”

Rodes adds that proponents of same-sex marriage are denying the existence of metaphysical differences between men and women. “Their right not to be interfered with in their sexual relation is secured by Lawrence v. Texas. Their right to a common domestic life can be secured in a number of different ways which different jurisdictions have adopted or are in the process of adopting. All that remains for them to ask for in seeking marriage by that name is metaphysical validation. The reason the state should reject this metaphysical claim is a simple one: it is not true."

Rodes teaches and writes in the areas of administrative law, civil procedure, ethics, jurisprudence, law and theology, legal history and welfare legislation. He is a member of the Catholic Commission on Intellectual and Cultural Affairs. Rodes joined the Notre Dame Law School faculty in 1956 as an assistant professor of law, achieved the rank of associate professor of law in 1958, and became a full professor in 1963. In 2000, the University honored Professor Rodes over 40 years of teaching and scholarship in the fields of legal ethics and jurisprudence by naming him the first permanent holder of the Paul J. Schierl/Fort Howard Paper Corporation Chair in Legal Ethics. He earned his A.B. from Brown University in 1947 and his LL.B. magna cum laude from Harvard in 1952, where he also served on the staff of the Harvard Law Review.