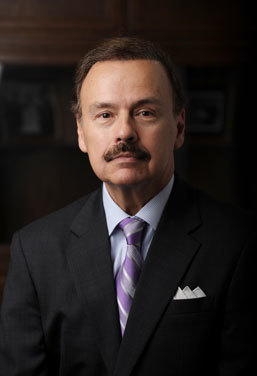 Jimmy Gurulé, an internationally known expert in the field of international criminal law—specifically terrorism, terrorist financing, and anti-money laundering—met with top government officials, prosecutors, bank representatives, and police officers in Albania’s capital city, Tirana, to discuss financial investigations and the fight against money laundering. He was in the Southeastern European country for three days, from Oct. 15-17, at the request of the Office of Overseas Prosecutorial Development, Assistance and Training (OPDAT) of the Department of Justice.

“There is no question that money laundering investigations are the most difficult of all criminal investigations,” Gurulé told Top Channel, an Albanian television station. “They require unique training, they require the ability to analyze financial records, computer records, to link together patterns of financial transactions between banks in Tirana as well as foreign banks. It is very difficult work.”

Gurulé told Top Channel that money laundering is particularly dangerous in developing countries and new democracies, like Albania’s, because it can have a corrupting influence on government itself. “In countries that are developing democracies, money laundering can undermine the country’s ability to develop, to grow, and to fully realize its potential as a democracy.”

Allegations of government interference with Albanian prosecutors’ efforts to combat money laundering plague the nation, and the United States Ambassador to Albania, John L. Withers II, forcefully condemned such behavior during a meeting with Gurulé and Albanian prosecutors. Gurulé agrees that interference with the justice system is a serious matter. “It cannot be condoned. It cannot be tolerated,” said Gurulé. “A democracy can only be successful if there is an independent prosecutor’s office and an independent judiciary.”

Still, Gurulé believes Albanian prosecutors have what it takes to fight money laundering successfully. “The groups represented at this training session, from bank officials to police officers, are learning how to better-coordinate their efforts to combat financial fraud,” says Gurulé. “Each unit has an important role to play, whether it’s identifying and flagging suspicious transactions, conducting due diligence to determine the legitimacy of a transaction, initiating investigations when warranted, or prosecuting offenders.”

According to The World Factbook published by the Central Intelligence Agency, “In the early 1990s, Albania ended 46 years of…Communist rule and established a multiparty democracy. The transition has proven challenging as successive governments have tried to deal with high unemployment, widespread corruption, a dilapidated physical infrastructure, powerful organized crime networks, and combative political opponents. Albania has made progress in its democratic development since first holding multiparty elections in 1991, but deficiencies remain… In the 2005 general elections, the Democratic Party and its allies won a decisive victory on pledges of reducing crime and corruption, promoting economic growth, and decreasing the size of government.”

Established in 1991, OPDAT draws on Department of Justice resources and expertise to strengthen foreign criminal justice sector institutions and enhance the administration of justice abroad.

While in Albania, Gurulé met with the Albanian Deputy Minister of Finance Florian Mima, the Prime Minister of Albania Sali Berisha, and the Chief of the Serious Crimes Prosecutor’s Office Olsi Cela.

Gurulé has just completed a book on how to stem the flow of money to terrorist organizations called “Unfunding Terror: The Legal Response to the Financing of Global Terrorism.” Gurulé was Under Secretary for Enforcement at the U.S. Department of the Treasury when 9-11 occurred. In that role, he had oversight responsibilities for the U.S. Secret Service, U.S. Customs Service, and the Bureau of Alcohol, Tobacco, and Firearms (BATF), among others.