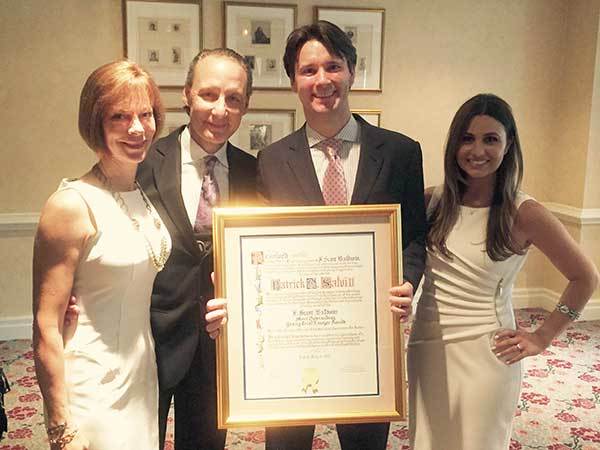 Patrick A. Salvi II ’07 J.D., was awarded the 2015 F. Scott Baldwin Award by the American Association for Justice at its annual convention in Montreal, Canada, this month, AAJ announced.

The F. Scott Baldwin Award is presented each year to the “most outstanding young trial lawyer” in the country.

The F. Scott Baldwin award was established to honor and recognize F. Scott Baldwin of Marshall, Texas, a world-renowned trial lawyer, whose efforts have produced outstanding damage awards for injured victims and their families. The award is given to a lawyer who has made a significant contribution to the New Lawyers Division of the AAJ and has attained one or more outstanding trial verdicts.

“I’m humbled to receive an award that bears the name of a trial lawyer that was renowned for his work on behalf of victims,” Patrick Salvi II told AAJ. “Scott Baldwin was not only a tremendous trial lawyer, but also a teacher through his speaking and published works. I am honored to be recognized and fully intend to continue my hard work on behalf of my clients that will carry on the tradition of the namesake of this prestigious award.”

Salvi II was recognized primarily for having secured verdicts of $1.2 million (Pope County record), $2 million, and $17.9 million within a nine-month period, AAJ said. Additionally, Salvi has been involved with the American Association for Justice for several years and sits on the Board of Governors and the AAJ PAC Board of Trustees. He is also a 2014 recipient of the AAJ’s Wiedemann and Wysocki Award.