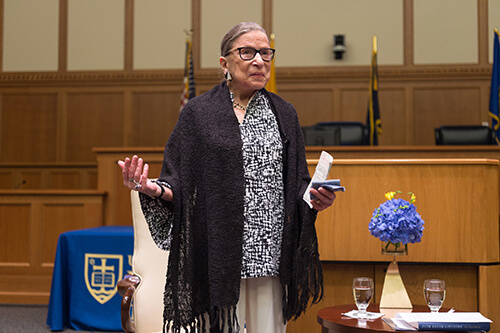 Justice Ginsburg, speaking at the Law School on Sept. 13, photo by Matt Cashore ’94

It was an actual Supreme Court justice, Ruth Bader Ginsburg, who showed up on campus on September 12th to address Notre Dame students and members of the public.

Ginsburg may not have the fan base of a Judge Judy, but she has her own celebrity — she’s known in pop culture as the Notorious R.B.G., a play on the stage name of now-deceased rap star Notorious B.I.G. In fact, she’s popular enough that an estimated 7,100 people attended her Monday evening address at Purcell Pavilion. The 83-year-old, who has thus far spent 23 years as an associate justice of the U.S. Supreme Court, spoke about both her professional and personal life, and her trademark wit and professional acumen were reportedly on full display.

When asked for instance, how many women on the Supreme Court would be enough, she answered, “I’m asked that question a lot — when will there be enough? When there are nine.”

In even-handed judicial fashion, she finished that wildly applauded statement by saying, “It didn’t seem there was anything wrong in the many years when the Supreme Court had only men.”

Fortunately for me, because I was unable to attend the Monday evening conversation, I was allowed to sit in as the justice spoke the next day at a noon gathering for law students in the Notre Dame Law School’s Patrick F. McCartan Courtroom.

Moderated by Jennifer Mason McAward, Notre Dame associate professor of law and director of the Center for Civil and Human Rights, the session began with a look at Ginsburg’s start in the field of law and the barriers that stood in her way as a Jewish female with a small child. Even her father had misgivings about her career choice, she said, but the fact that she had married a lawyer eased his concerns: “If she can’t get a job, she has a man to support her.”

The discussion of barriers led to a question about her work in the 1970s with the ACLU’s Women’s Rights Project. “Why that particular line?” asked McAward.

Ginsburg, who taught law at Rutgers from 1963 to ’72, said it was her students who piqued her interest in that field when they asked for a course on women and the law. So, like a good professor, she started researching federal decisions about the topic. What she learned, she said, was that there was “precious little” published information available and “whatever there was was not good,” a remark that prompted laughter from the gathering of law students.

That interest led to Ginsburg’s decade of litigating gender-discrimination cases for the ACLU, and she walked the legal audience through several of what she called her “favorite cases.” That included Reed v. Reed, which resulted in the Supreme Court’s 1971 ruling that the 14th Amendment’s equal protection clause also guaranteed “the equal protection of the laws” to women.

The justice made clear, however, that her ACLU work also aided males harmed by a system of laws and codes defining rights by gender. In Weinberger v. Wiesenfeld, for instance, the Supreme Court struck down a portion of the Social Security Act that did not allow widowers caring for minor children to collect the benefits available to widows in that same situation.

There is, she said, “something very wrong with classifying people rigidly on the basis of gender.” It was a sentiment she reiterated in response to a student question on which obstacles to gender equality have been conquered. “The obstacles that have been overcome are the explicit gender lines in the law.”

Less anyone be tempted to celebrate, the justice warned that the battle is not yet won, pointing to the continuing existence of “unconscious bias.” Overcoming that type of bias, she said, “is not easy to do.”

To illustrate how unconscious bias works, music-lover Ginsburg returned to her well-known example of the lack of female musicians in major symphony orchestras during the 1940s. It was not until those auditioning for spots were hidden behind a curtain so the people judging wouldn’t know their gender, she said, that more women earned places in the orchestras.

The justice, however, was not one to point fingers, simply saying that interviewers, critics and others tend to respond to those who look like them, with whom they feel most familiar. Unfortunately, she noted, most of life can’t be lived behind a curtain.

She followed up that discouraging bit of news with another warning for the audience of law students who think the age of discrimination may be mostly in the rearview mirror: “Wait ’til baby comes,” the justice said ominously.

“Many legal employers,” she added, “have not yet appreciated how sensible it would be to offer flexible time to parents.”

After offering the students a history lesson on due process and equal protection, Ginsburg reminded tomorrow’s lawyers of the importance of what they do.

“The law exists to serve,” she said. “The law exists to help a society stay together in harmony.” It affects people every day, she pointed out, and “if you are a true professional, then you will devote part of your time ... to help repair tears in society.”