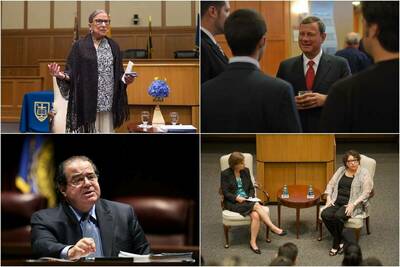 Three U.S. Supreme Court justices visited the University of Notre Dame campus during the first month of this fall semester.

The visits are part of a long tradition at Notre Dame, where members of the nation’s highest court have been welcomed to campus to share their knowledge and views on the law. Here is a look back at some other visits from Supreme Court justices over the past 20 years.

When Associate Justice Ruth Bader Ginsburg visited campus in 2016, more than 7,000 people packed into Purcell Pavilion for her conversation with Notre Dame Law alumna Ann Claire Williams ’75 J.D., then a judge on the U.S. Court of Appeals for the Seventh Circuit.

Ginsburg encouraged law students “to help repair tears in society” through their work as lawyers.

Associate Justice Sonia Sotomayor shared personal anecdotes as well as her viewpoints on the Supreme Court and the law during an appearance at Notre Dame in 2015.

“I have always tried to approach the law as a learning process, as one of trying to understand how other people have approached particular questions,” she told NBC News Correspondent Anne Thompson ’79 during their public conversation in the DeBartolo Performing Arts Center. “I believe that people really expect the law to have some fixed meaning that gives them some measure of comfort in their human relations.”

Sotomayor met with Notre Dame Law School students during that same visit. She spoke to law students and responded to their questions in the McCartan Courtroom.

In 2014, he served as the Judge James J. Clynes Jr. Visiting Chair. The day’s events included a conversation between Justice Alito and Notre Dame Law Professor William Kelly in the McCartan Courtroom. Kelley served as a law clerk early in his career for Chief Justice Warren Burger and Associate Justice Antonin Scalia.

Alito returned to Notre Dame in 2015 for a panel discussion on a book, “Italian Constitutional Justice in a Global Context,” co-authored by Paolo Carozza, a Notre Dame Law School professor and director of the Kellogg Institute for International Studies.

Justice Thomas and Notre Dame Law Professor Nicole Stelle Garnett, one of his former clerks, participated in a conversation in McCartan Courtroom that touched upon the justice’s childhood influences, his judicial philosophy, and his expectations of law clerks.

Thomas returned to the Law School in 2014 to teach an intensive seminar course, Religious Freedom and the Establishment Clause, with Professor Richard Garnett. Students enrolled in the course spent the week closely examining the Establishment Clause’s text and context, as well as Supreme Court decisions dealing with church-state matters and religious freedom.

The chief justice met and spoke students and faculty in a series of events throughout the day. One of those events was a conversation with Notre Dame Law Professor William Kelley onstage at the DeBartolo Performing Arts Center.

A few quotes from the conversation:

Associate Justice Antonin Scalia spoke at Notre Dame twice and received an honorary degree from the University during his years on the Supreme Court.

In 2007, Justice Scalia delivered the opening lecture at a conference organized by the Notre Dame Law Review and Professor Anthony J. Bellia, who clerked for Scalia at the Supreme Court. In his lecture, “The Importance of Structure in Constitutional Interpretation,” Scalia discussed the unique function of the judiciary in American government and analyzed several cases that the Supreme Court has decided.

Scalia previously spoke at Notre Dame during the spring semester in 1997, when he delivered a lecture titled “On Interpreting the Constitution” in DeBartolo Hall. Also in 1997, the University presented Scalia with an honorary degree at commencement.

His lecture was about the use of military tribunals in the United States during times of war. The historical perspective focused on what the Supreme Court had said in the past about the use of these tribunals. It was a timely topic, as the chief justice delivered his speech around the one-year anniversary of 9/11.

Rehnquist also attended a First Amendment class taught by Professor Richard Garnett, who clerked for the chief justice during the Supreme Court’s 1996-97 term.