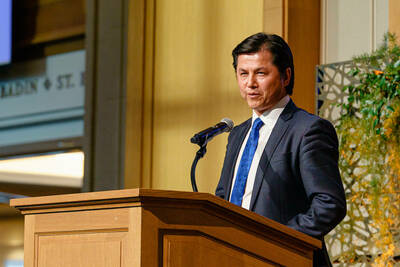 This past weekend, USA Today published a powerful op-ed written by Nury Turkel of the U.S. Commission on International Religious Freedom regarding the atrocities that China’s government has perpetrated on Muslim Uyghurs.

Commissioner Turkel mentions in the op-ed that the Notre Dame Prize for Religious Liberty, which he received at our June summit, is one of the accomplishments and honors that give hope to his fellow Uyghurs.

The op-ed is reprinted below with USA Today’s permission.

Uyghur American: I was born in a Chinese reeducation camp. I will always fight China’s lies.

Uyghur children shaped by our mothers’ sufferings, our fathers’ toil, and our homelands’ tribulations, will not rest until China’s lies are exposed.

My mother gave birth to me while in captivity in China. On that day, in that prison called a reeducation camp, I don’t imagine that she could have envisioned the life I would eventually lead.

She could not have known I would obtain a law degree at American University, serve as vice chair for the U.S. Commission of International Religious Freedom, or receive the inaugural Notre Dame Prize for Religious Liberty. But while she may not have seen my future, I do know she had a dream for my life. She dreamt I would live in freedom and that her children’s children would grow up without the heavy burden of traumatic life experiences like torture, silencing or imprisonment.

I have the same dream for my fellow Uyghurs.

But China is determined to destroy us. Last month, the Chinese government engaged in an online propaganda campaign featuring several Uyghur men and women, including the relatives and grandchildren of innocent men and women currently in exile, broadcasting that all is well for all Uyghurs in Xinjiang, which the Uyghur people call East Turkistan. The opposite is true.

As many as 3 million Uyghurs have been sent to industrial-scale concentration camps; many of them have been tortured while imprisoned Uyghur women have been sexually abused and sterilized. The Chinese Communist government has deployed every technology it has to enforce its harsh measures of control including intrusive surveillance networks reminiscent of dystopian movies that, until now, only existed in our darkest imaginings. Across the Uyghur region, the government has created programs to forcibly gather DNA samples and employ iris scans that feed into biometric data used to monitor the population.

But even the community of Uyghurs fortunate enough to live in the free world are also held captive by the Chinese regime’s repression. As one of our poets in exile hauntingly described, our “eyes can’t sleep.” We continue to push for free countries to denounce these horrors, to take action against China, and to liberate our brothers and sisters from this nightmare.

There are around 12 million Uyghurs in China; the vast majority of us are Muslim. Fearful of our peaceful and unique culture, China has flooded our homeland with millions of non-Uyghurs, destroyed our mosques, and detained hundreds of our imams. Unfortunately, the international community has been slow to respond largely because China has used one word du jour to justify its relentless atrocities: extremism. Evoking false images of impending terrorism, fueling anti-Muslim bigotry, and taking advantage of ignorance about our people, China has largely succeeded in neutralizing the free world. Until now.

My mother’s dream lives on

The United States government has finally used the right term to describe what is going on in China: “genocide.” And, words, like dreams, have immense power over our future. Calling out what is going on in the Uyghur region carries serious consequences. Using the right words also calls on our Congress to use the powerful weapons it has at its disposal to combat genocide.

Under the Magnitsky Act, for instance, the U.S. sanctioned the top Chinese Communist Party (CCP) official responsible for draconian measures against Muslims since 2016, Chen Quanguo. Western diplomats are also using international bodies to raise awareness of the Uyghur situation, and to call for the international community to deploy all of its mechanisms — from multilateral diplomatic efforts to international sanctions — to stop China’s abuses against our people.

The new propaganda campaign China created actually gives me hope. Their project of lies signals the triumph of the words we Uyghurs can use when we are free. Words like “genocide,” “atrocities,” and “religious freedom.” The Chinese authorities understand the immense power we invoke when we spotlight the true stories of our people, when we dream of a free future, and when Americans join us in recognizing our inherent right to religious freedom.

My law degree, the political appointment the speaker of the House bestowed on me, the award Notre Dame Law presented — each of these things do not belong to me. They sprang from my mother’s dream and from the dreams all Uyghur mothers have for their children. Every accomplishment of my career and every honor only serves to remind my brothers and sisters that they are not alone, that perhaps the CCP can silence them but it cannot extinguish their dreams, and that there is hope despite their unfathomable suffering.

In an old song popularized by a Uyghur artist, Exmetjan, a mother calls for her son to fulfill his destiny. She says: “My son, please do things worthy of my milk, may flowers cover your steps. Set your eyes on the future; give to our homeland, and it will laugh.”

We, the Uyghur children shaped by our mothers’ sufferings, our fathers’ toil, and our homelands’ tribulations, will not let our eyes sleep while the destruction is ongoing. We will have victory over evil for the sake of our people. Because, just as the Chinese government officials who kept my mother captive could not prevent her from dreaming of freedom, the CCP’s campaign of lies will not prevail against the power of truth.

Nury Turkel is a senior fellow at the Hudson Institute and a commissioner on the U.S. Commission on International Religious Freedom.

You can also watch a video of Commissioner Turkel’s acceptance speech after he was presented with the first Notre Dame Prize for Religious Liberty.