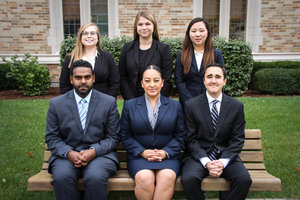 Andrew Meerwarth, 2L, founded the newly created Vis Moot team, and is the team’s manager. He schedules meetings, practices, and makes sure the group is meeting competition deadlines. Meerwarth created the group to expand his peers’ opportunity to hone their written and oral advocacy skills, from a global perspective, he said.

“An international moot presents a unique opportunity to compete against teams from all around the world,” Meerwarth said. “Mooting sharpens fundamental lawyering skills such as analysis, research, writing, and oral advocacy. It is about making someone an effective communicator to a wide array of people. And in international moots, it is about being exposed to other cultures and ways of thinking. This is important in a globalized economy.”

Christine Venter, director of Notre Dame’s Legal Writing Program and the team’s assistant executive coach, said the competition is also significant because it focuses on arbitration instead of standard litigation.

“We have a very active Moot Court program but by competing in the Vis competition, our students are recognizing the importance of alternative forms of dispute resolution, especially in the transnational context,” she said. “As the practice of law is becoming more global, I am excited that our students will have an opportunity to meet with lawyers and students from around the world and learn about different ways of approaching legal disputes.”

The team is responsible for writing two briefs, one for the claimant and one for the respondent, Meerwarth said. After the briefs are submitted, the team will prepare for the oral argument phase of the competition. Team members will take part in a practice schedule that will include, among other things, internal practice rounds and participation in pre-moot competitions. The competition takes place April 8 through 11, 2017.