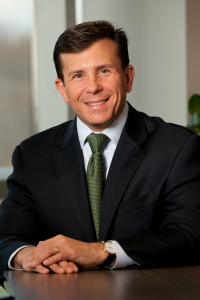 John Crowley, ’92 J.D., and his family had been in the spotlight before President Donald Trump lauded his daughter Megan Crowley as “an inspiration to us all” during last month’s address to a joint session of Congress.

Megan Crowley, a Notre Dame sophomore, and her younger brother, Patrick, are both survivors of Pompe disease – a rare neuromuscular disorder that was killing them until John Crowley started a biotech company and, against all odds, developed a cure.

The Crowleys’ story was portrayed in the 2010 film “Extraordinary Measures,” which starred Brendan Fraser as John Crowley and Harrison Ford as a researcher.

At a political event, the Crowleys’ story transcended politics.

“For maybe two minutes, there were no Republicans or Democrats. There were moms and dads, grandmas and grandpas, aunts and uncles. That was a proud moment,” said Crowley, chairman and CEO of Amicus Therapeutics.

“Megan knows that she was a proxy for millions of people living with health challenges – kids in wheelchairs, adults with Alzheimer’s,” he said. “She also realized that her character and her strength were on full display that night and throughout the day at the White House and the business we had on Capitol Hill. There’s a lot more work to do, but I think it’s moments like this that really help us step back and think about why we do what we do.”

Crowley spoke to students about how he transitioned from a career as a lawyer to a career in business consulting and how he became a biotech entrepreneur, despite not being a particularly strong student in math and science.

There are several characteristics that entrepreneurs need to be successful, he said. They need to have vision, a tolerance for risk, and – perhaps most of all – the ability to persevere.

“But I do think – when it works – it’s one of the best jobs you could ever have, because you deliver hope to people,” he said. “It’s hope that you can beat nature, and it’s hope that you can beat time. That’s a really important point to understand in your careers and practices – the importance of time in the health care field. Beating nature is important, but so is beating time.”

James Farrington, an adjunct professor at the Law School and a partner in the Corporate Practice Department and Life Sciences Practice Group at Wiggin & Dana LLP in Stamford, Conn., said at the end of the presentation that it’s important for lawyers to remember how their work can impact scientific advances.

“You’ll find in your career that you’ll be working many late nights, you’ll have many lost weekends, you’ll have vacations that are canceled. One thing that motivated me – being fortunate to work in the life sciences industry – was to know that with most transactions I was working on, there was a Megan or a Patrick somewhere in the world that was affected by that,” Farrington said.

“Keep that in mind,” he said. “It’s a race against time. I’m not a scientist, I’m not discovering the drug, but I can get that contract out a day earlier, a week earlier, and get things advanced. That’s what really motivates me and has been very gratifying for me in my career.”

Crowley’s presentation was sponsored by the Intellectual Property Law Society and the Health Law Society.