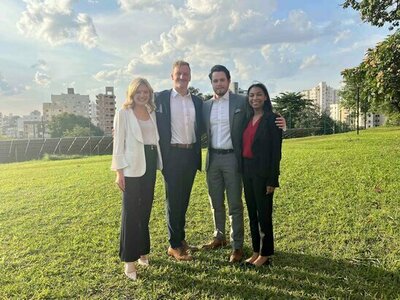 Once again, the Notre Dame Law School Moot Court Board had a successful showing at an international moot court tournament earlier this month. The Brazilian Center for Studies in Law and Religion hosted the International Law and Religion Moot Court Competition in Uberlândia, Brazil, on November 9. The competition consisted of teams from various law schools, including Notre Dame Law School, two teams from the Brigham Young University J. Reuben Clark Law School, and three teams from across Brazil. The ND Law School Moot Court Board found out about the opportunity through ND Law’s Religious Liberty Initiative.

In September, the Moot Court Board competed at the International Moot Court Competition in Law and Religion, organized by the International Consortium for Law and Religion Studies in Córdoba, Spain. The Notre Dame team took “Best Team” in both the United States Supreme Court division and the European Court of Human Rights division at that competition.

Taylor Wewers, a third-year student at ND Law School, had the opportunity to compete in the tournaments in both Spain and Brazil. She expressed that her experience in Spain was particularly helpful in shaping her team’s arguments for the tournament in Brazil. Wewers had also gained a comprehensive understanding of pertinent religious liberty issues through the International Religious Liberty course taught by Professor Mark Hill, which she took during her year spent in the Notre Dame London Law Programme.

Wewers and Ian McKay, also a third-year student at ND Law School, served as researchers and brief writers for the tournament in Brazil. Christopher Ostertag and Tysan Holloman, both second-year students at ND Law School, were oralists at the competition. Ostertag, a student in the Notre Dame Religious Liberty Clinic, won the award for “Best Oralist.” The Notre Dame team also won “Best Brief” in the competition and took home second place overall.

The hypothetical case discussed at the tournament was N.E. v. Republic of Seculana of the Amerigos, which pertains to arguments within the International Covenant on Civil and Political Rights, a multilateral treaty that commits nations to protect the civil and political rights of individuals. Specifically, the teams focused on Article 18, which guarantees freedom of religion. Teams were encouraged to discuss and debate the relations between human rights, religion, and human dignity.

“As our team was assigned to represent the hypothetical state party, who, on the issue of potential violations of religious liberty, had quite clearly interfered with the fundamental rights of its citizens, my biggest takeaway was the experience of working with the difficult facts, determining where to concede, and shaping the issue in our favor. I have no doubt this is a lesson that can be applied to my and my teammates’ future careers,” Wewers said.

Wewers also shared that, while the hypothetical case demonstrated obvious instances of human rights violations, it was not clear cut on the issue of admissibility. According to Wewers, the judge of the tournament concluded that the claim would have likely been found inadmissible.

“Competitors were reminded that pointing to a violation of a protected right is not always enough in obtaining redress, which is a frustrating, yet realistic scenario that is often in international and domestic systems,” said Wewers. “The entire competition served as a learning mechanism that taught future lawyers from various countries that careful attention and care must be given to procedural issues in every case, even the most significant religious liberty cases, to ensure redress.”

McKay cited the competition as one of his favorite experiences at Notre Dame. “Not only were we challenged to learn a whole new body of law, but we also got to meet incredible law students from Brazil who are passionate about religious freedom,” he said. “The tournament was a great opportunity to see how other law students approach legal problems, and our team had an awesome time.”

The Moot Court Board is now preparing for team-specific competitions that will primarily take place in the spring semester. The Board consists of the American Bar Association (ABA) Team, the Jessup Team, the Intellectual Property Team, the Showcase Team, and the Seventh Circuit Team. Holloman and Wewers are members of the Jessup Team, while McKay and Ostertag are on the Seventh Circuit Team. Although each team is preparing individually, members of the Moot Court Board are always encouraged to collaborate and represent the Board and ND Law School at additional competitions.