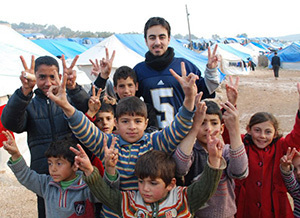 As Kenan Rahmani (J.D. candidate 2015, krahmani@nd.edu) looked up at the plane that had just dropped a TNT barrel and killed 18 innocent people near him, he said his shock and fear differed sharply from the unaffected attitudes of the Syrians that surrounded him. For them, destruction is a normal, everyday occurrence, he said.

Rahmani, a law student at Notre Dame, was one of nine individuals sponsored by the Syrian American Council (SAC) to journey to the country over Christmas break to provide aid to the refugees. The nation has been engaged in a rebellion against the oppressive Assad regime since April 2011.

Rahmani, who is of Syrian descent, said he is determined to do something to help the country and the people within its refugee camps.

“Our task was to assess the humanitarian situation in order to improve it,” Rahmani said. “The camps are filled with people dying, kids freezing. In some camps, the only food provided is one boiled potato per tent, to be shared with multiple people.”

The Free Syrian Army is composed of rebels fighting against the oppessive police state, Rahmani said. He said the regime has used every weapon imaginable to punish its people. Currently, the rebel forces have captured roughly 60 percent of land area in Syria.

“The conflict has already killed 60,000 people, and those are just the documented deaths,” Rahmani said. “There are close to 140,000 people missing, most of whom are dead. No matter where you go, you cannot find a single household that is whole.”

The refugee camps are filled with 700,000 Syrian citizens displaced by the war, Rahmani said. He and his companions delivered $15,000 in aid to the camps. This money funded the construction of bathrooms, paving roads and fuel generators. They also donated $4,000 of flour to a suburb of Aleppo, a major city in Syria, which was enough money to bake bread for everyone in the town.

Rahmani emphasized, however, that the struggle to overcome the devastation will not end with the end of the conflict.