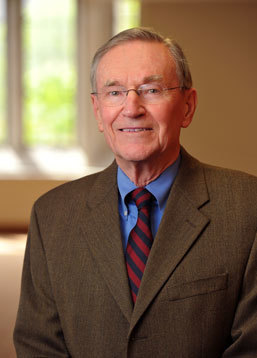 In his remarks, Prof. Kommers compared the structure of judicial review in Germany to that in the United States. He also talked about the judicial review of security legislation in Germany, indicating how some American anti-terrorist policies would be decided in Germany’s Federal Constitutional Court.

With scores of major publications to his name, Kommers’ work has been highly acclaimed by legal scholars and political scientists alike. A leading American authority on Germany’s political and constitutional system, he was honored recently by Heidelberg’s Ruprecht-Karls-University “for advancing cooperation between American and German legal scholars and for the role his publications have played in bringing Germany’s constitutional jurisprudence to the attention of Anglo-American legal audiences.”

Prof. Kommers is the author of the widely acclaimed book, “The Constitutional Jurisprudence of the Federal Republic of Germany.” His next book, “Germany’s Constitutional Odyssey,” will be published in 2011.

In addition to lecturing widely in the United States and abroad, Professor Kommers has held many prestigious positions and fellowships. He has been a frequent recipient of fellowships and grants from the National Endowment for the Humanities, a resident scholar in Germany’s Federal Constitutional Court, an Alexander von Humboldt Fellow on the law faculty of Cologne University (Germany), a Max Planck Society Fellow in the Max Planck Institute of International and Comparative Public Law in Heidelberg, a Fulbright Lecturer at the University of Tokyo, and the winner of the Alexander von Humboldt Prize for senior U.S. scholars, an award that allowed him to spend yet another year in Germany working on projects of his own choosing.

As Professor Emeritus he continues to teach advanced courses in American and comparative constitutional law. He earned his B.A. in philosophy and English literature from the Catholic University of America and his advanced degrees (M.A. and Ph.D.) in political science from the University of Wisconsin-Madison, where he also studied law. In 2008, he won the Berlin Prize, a coveted award that permitted him to spend a residential fellowship at the American Academy in Berlin (Germany) where he continued his work on Germany’s constitutional experience since 1945.