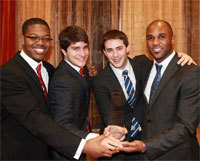 Notre Dame’s BLSA Mock Trial Team were crowned regional champions February 18 and now will be advancing to the nationals in Washington, D.C.

Unbeknownst to them at the time, two NDLS alumni were also present during the competition. Alvin McKenna, J.D. ’66, was volunteering his time to judge the final round and the Hon. Maxwell Griffin Jr., J.D. ’80, was coaching an opposing team.

The NDLS Moot Court team (2Ls Matt Treadwell and Lamar Winslow) were edged out of the semi-final round by just a few points.