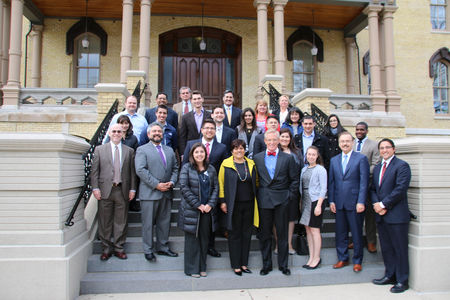 For 20 years the Graciela Olivarez Award has been presented to Hispanic lawyers and judges whose work embodies the spirit of Graciela Olivarez, the first woman and first Hispanic to graduate from Notre Dame Law School. Olivarez was a lawyer who spent her career advocating for civil rights and for the poor. She served as the chair of the Mexican American Legal Defense and Education Fund, and was one of the first two women on its board. In 1977, President Jimmy Carter appointed her the director of the Community Services Administration. She thus became the highest-ranking Hispanic woman in the Carter administration.

“JoAnn has made outstanding contributions to the Hispanic community,” said Alexis Maguina, co-president of HLSA. “Like Graciela had, she now lives in her hometown and is helping the community she grew up in to flourish.”

She has more than 25 years of experience in the areas of tax accounting, controversy, risk management, mergers and acquisition, tax planning strategies, and is currently responsible for overseeing all of DTE Energy’s tax strategy, policy and compliance, including federal, state and local income, sales, use, and property taxes.

“The Graciela Olivarez Award is recognizes the multiple ways that Hispanic people contributed to our society, especially within the Hispanic community,” Maguina said. “It is meant to show that at 17 percent of the population — the members of the Hispanic community — can be as successful, philanthropic and politically active as any other member of society.”

Chávez has often been recognized for her achievements in advancing the culture of Latino American businesses, and is a frequent speaker in the Hispanic community. To create a pipeline of Hispanic legal leaders she recently established the Chávez Family Law Fellowship at the Law School.

“I am passionate about seeing members of the Hispanic community achieve the same success as I have,” Chávez said. “The educational opportunities at Notre Dame transformed my life and I want to offer that same opportunity to other Hispanic young people.”