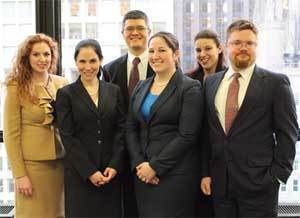 Mock trial competitions at the law school level literally prepare students to walk into a courtroom after graduation knowing how to try a case. In many cases, their skill level will be equal to or above that of lawyers who have been practicing for years. Not only do the students know what to do in the courtroom, they know how to do it competently and with poise. Coach Joel Williams says, “In the tradition of Notre Dame Law School, we’re training a different kind of litigator.”

The National Trial Competition at which the Barristers teams compete is the oldest and most prestigious trial competition in the country. Sponsored by the American College of Trial Lawyers and the Texas Young Lawyers’ Association of the State Bar of Texas, the competition consists of regional rounds throughout the United States followed by the final rounds in Texas. The Notre Dame Law School Barristers Trial Team advanced to the final rounds in 1976, 1981, 1982, 1986 and 1992, 1993, 2000, 2005, 2007, and 2008 and were National Champions in 1993 and 2000.

The 2012 NDLS Barristers Trial Team competed in the Chicago Regional where they faced three of the four semi-final teams. Not counting the time they spent preparing outside the courtroom and doing research, the Barristers team practiced over 120 hours in the courtroom in just six weeks, and turned in very strong performances.

Pictured above: standing at the Daley Center in Chicago, from left to right in the photo are: Stephanie Rochel, Laura Ewan, Hiroshi Bowman, Laura Bird, Lisa Crabtree and Cooper Gallimore.

Likewise, the 2011 NDLS team competed in the Valparaiso Regional of the National Trial Competition. 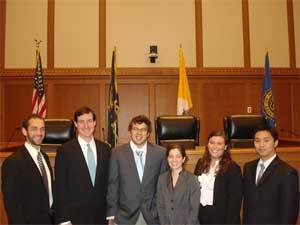