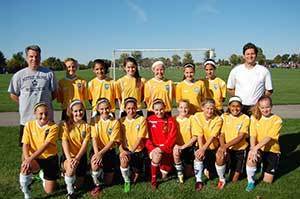 Coached by 3L Paul Kerridge, an Indiana Invaders girls’ travel soccer team has qualified for nationals and will compete against some of the best soccer teams in the country in three days of group play Dec. 5-7, with semifinals and finals set for Dec. 8-9.

Kerridge’s South Bend team competed all summer in the regional Super Y League and qualified for the 2013 North American Finals at the world-class IMG Academy in Bradenton, Florida—the same facility where the U.S. Women’s National Team trained for the London Olympics.

Unlike some youth teams, the Invaders girls stay together as a team with the same coach as they move up in the age brackets each year. Thus the 9-year-old girls Kerridge met when he first began coaching the team are now 13. “They’re a really great group of kids,” Kerridge said, “and more than half of them have Notre Dame connections. I just hope we can find a way to ensure all of them can afford to fly with us to Brandenton. We’ve been trying to raise money like mad to make sure all the girls can make it, but we still have a ways to go.”

A fundraising page has been created to help Kerridge’s team with their travel expenses.

Photo: The Indiana Invaders U13 soccer team, with assistant coach Andy VanDyck on the left and 3L Paul Kerridge on the right.