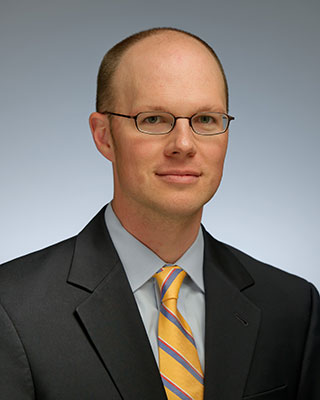 Stephen Yelderman has been granted tenure as a professor of law at Notre Dame Law School. Yelderman joined the faculty in 2013 and has taught patent law, copyright, remedies, and introductory intellectual property.

“As dean, I could not be more pleased by Professor Yelderman’s accomplishment, and I know the entire Law School community is equally delighted,” said Nell Jessup Newton, the Joseph A. Matson Dean and Professor of Law. “This promotion is richly deserved.”

Yelderman’s recent work on patent damages was cited during oral arguments at the Supreme Court last month. His articles have appeared in journals such as the University of Chicago Law Review and the Harvard Journal of Law and Technology, and he continues to work on a number of projects related to patent law, copyright, antitrust, and remedies.

“Both the students and faculty make Notre Dame a very special place to be,” Yelderman said. “I am so grateful to be a part of this community.”

Yelderman came to Notre Dame Law School from the Department of Justice’s Antitrust Division, where his work focused on the telecommunications and content industries. Prior to that, Yelderman clerked for the Honorable Neil Gorsuch on the Tenth Circuit Court of Appeals and represented start-up companies as a patent agent in Silicon Valley.

Yelderman graduated with High Honors from University of Chicago Law School, and holds M.S. and B.S. degrees in electrical engineering from Stanford University.