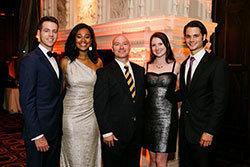 The 2013 AAJ Student Advocacy Trial Competition (STAC) began with over 230 teams vying for the national championship. Notre Dame Law School’s national championship team was comprised of students Michelle Pope, Shelia Prendergast, Brian Salvi, and Kristian Weir, and was coached by Assistant Adjunct Professors Joel Williams and Katherine Singer. The team tried its case a total of 11 times during the regional and national competitions, never losing a trial, and maintaining the number one seed throughout both the regional and national competitions. 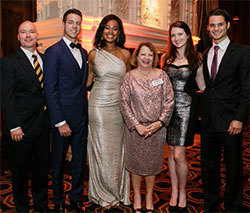 At the Belli Society dinner, coach Williams spoke to a crowd of more than 100 of the nation’s top litigation attorneys about how the NDLS team’s preparation, performance, and perseverance enabled them to win the national championship. Thereafter, each of the winning team members received a $2,000 Stanley Priser Law Student Award for Trial Advocacy.

As a result of winning the National Championship, Notre Dame Law School received and accepted an invitation to compete at the National Institute for Trial Advocacy Tournament of Champions in Birmingham, Alabama, in late October 2013.