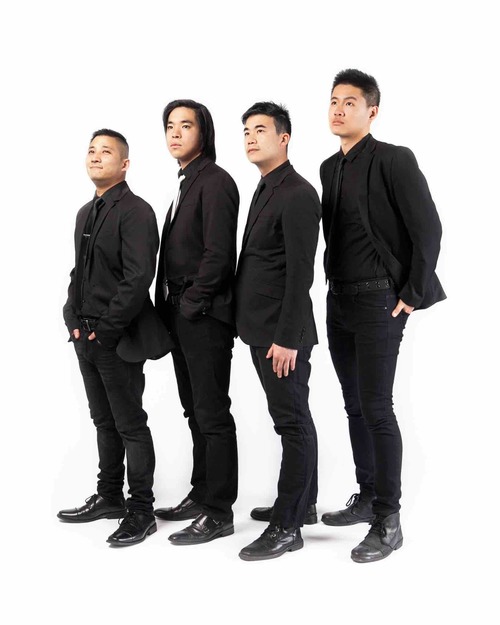 The Slants will perform at noon Saturday, Sept. 30, in the Patrick F. McCartan Courtroom at Notre Dame Law School. The band members will also participate in a question-and-answer session about the legal battle to trademark their name.

The Patrick F. McCartan Courtroom has hosted distinguished speakers, including several U.S. Supreme Court justices, as well as real courts, including the Indiana Supreme Court and the U.S. Court of Appeals for the Armed Forces.

But on Saturday – for the first time – the McCartan Courtroom will host a concert.

The Slants, a dance-rock band from Portland, Ore., will be here from noon to 1:30 p.m. for an event that will combine music and law.

The band members will play some of their songs and talk about their legal battle to trademark The Slants’ name – which the U.S. Patent and Trademark Office rejected in 2010 because it was deemed disparaging to people of Asian descent.

The four men in The Slants are of Asian descent, but their ethnicity isn’t the only reason for the band’s name. The name – which is meant to be a reappropriation of an offensive term – also refers to a slant on life and slant chords in music.

The band’s case, Matal v. Tam, proceeded all the way to the U.S. Supreme Court.

In June, the court ruled in The Slants’ favor on the grounds that the Lanham Act’s disparagement clause – which allowed the government to deny trademark protection for disparaging names – violated the First Amendment right to free speech. The decision attracted attention not just because of The Slants, but also because it was a win for the Washington Redskins’ efforts to keep that controversial team name.

The Intellectual Property Law Society and the Asian Law Students Association are sponsoring the concert and question-and-answer session.

Matthew Curtis, a 2L and member of the IP Law Society, played a part in bringing The Slants to Notre Dame Law School. He is a co-host of the podcast This Week in Law and interviewed the band’s founder and frontman, Simon Tam, shortly after the Supreme Court decision in June.

“Simon said they were going to be in Chicago, and I told him I would have to come over for that. He said they would come play at Notre Dame,” Curtis recalled.

“Law students shouldn’t skip this,” he said. “This is a rare opportunity.”

Emily Pyclik, president of the IP Law Society, said this will be the most exciting thing to happen in the McCartan Courtroom since Supreme Court Justice Ruth Bader Ginsburg visited the Law School in September 2016.

“This is a unique and fun opportunity for our students to hear from a band that fought their case all the way to the top and prevailed,” Pyclik said. “This event will spark interest not only from students hoping to practice IP law, but also those who are interested in constitutional law, free speech, appellate litigation, or even just music.”

ALSA issued a statement that said, “The Asian Law Students Association is excited for the opportunity to co-host The Slants here at Notre Dame. We look forward to an engaging discussion on trademark law and constitutional rights in light of Matal v. Tam.”

The event is free and open to the public. No tickets are needed for admission.